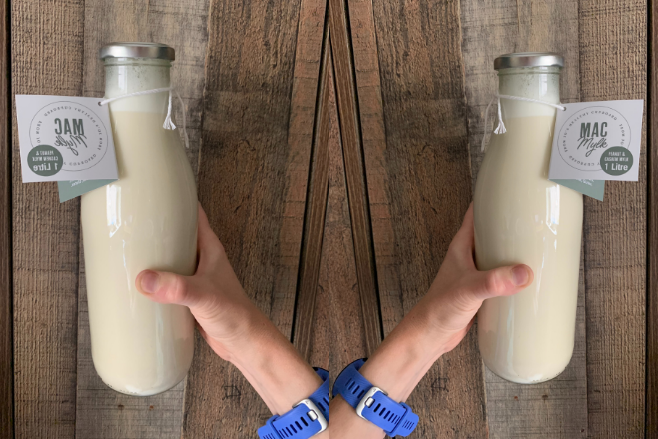 Aberdeen-based mum, Jo, got sick of Tetra Paks, so created her own refillable nut milk brand

All great businesses are borne out of necessity, and that was definitely the case with Jo’s MacMylk, an exciting new organic, refill nut milk brand.

Just last year, vegan mum of two, Joanna McDonald, became fed up with Tetra Pak cartons mounting up in her recycling bin each week. So, she decided to take matters into her own hands by crafting her own plant-based refill nut milk in glass bottles.

During the first lockdown of 2020, Jo began searching for refill nut milk in her local area, after reading that only 26 per cent of Tetra Pak cartons are recycled globally. When she couldn’t find any refill nut milks in Scotland, she decided to make her own. Jo explains: “I couldn’t find a company in Scotland that was making refill nut milks and I thought, why don’t I do that?! It was really that simple.”

“I ordered a nut milk machine and started experimenting and giving friends samples to try. The feedback was very positive. I tried a few different milks but decided to focus on peanut milk and almond milk, which were most popular.” After 18 months developing her milks, working with a food consultant, going through lab testing and a lengthy health and safety process, Jo’s MacMylk is finally ready to launch in Aberdeen on Friday 3rd September.

As well as delivering her first order to an Aberdeen refill store in September, Joanna will be running online milk making workshops to help those living further afield switch Tetra Pak for homemade oat and nut milk.

Jo’s dairy-free nut milks are prepared using 13 per cent organic nuts, almonds from Europe, organic dates to sweeten and a pinch of Isle of Sky Sea Salt. Her peanut and almond milk are sold in refillable, returnable glass bottles and made in small batches. Jo hopes she can encourage more people to really consider the number of plastic cartons they buy and swap at least one of those a week for a more nutty, naturally delicious, dairy-free, refill milk, that’s better for the planet.

Joanna Macdonald, who’s a mum of two, researcher and writer, has been blogging about plant-based living and her sustainability journey for over six years. She shares recipes, tips and reviews on her site Jo’s Healthy Cupboard.