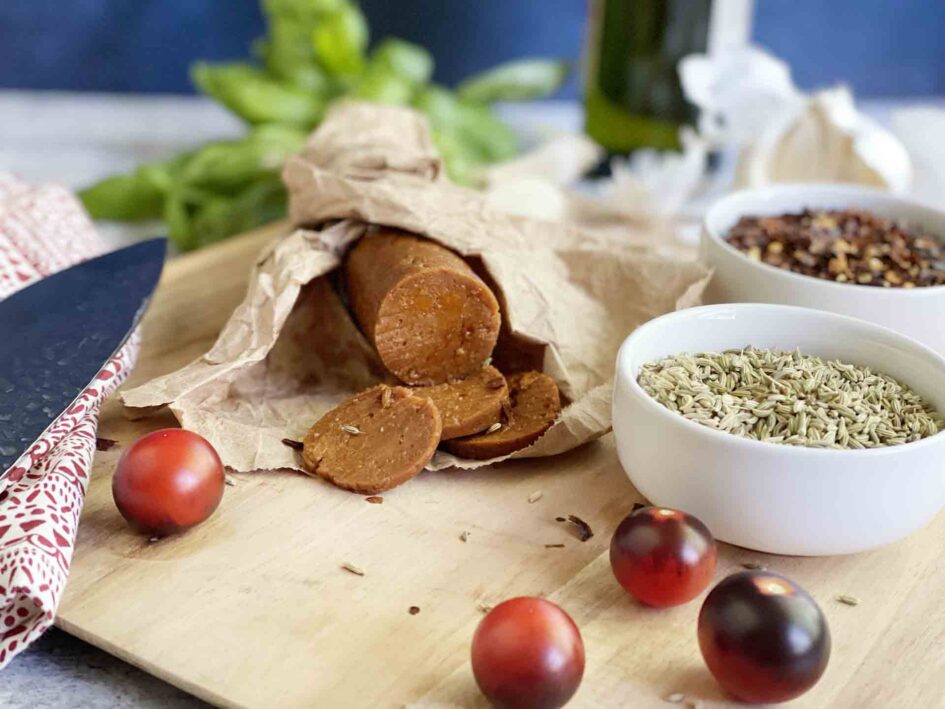 Disclosure: Gratitude and thanks to Book Publishing Co. for graciously sending me a copy of Crafting Seitan for review. All opinions expressed are mine and not influenced in any way by the receipt of goods or services. I will always notify you when a product has been given to me for review, use, or to talk about.

First things first, the aesthetics of the book.

The book has a muted color palette using browns and greens with maroon and dark blue accents that work well. It sets the perfect neutral backdrop for the full-color photos, allowing them to stand out.

Recipe pages are in a clean, easy-to-follow format with an introduction and detailed preparing instructions. Most of the recipes have photos of the finished dish included. Chef’s notes and additional instructions on shaping or finishing the meats stand out inside colored boxes on recipes as needed.

As someone with vision impairments, I appreciate the soft off-white of the pages and adequately-sized, easy-to-read text with good spacing.

As for more practical matters, the book is broke out into the following sections: One of the things that I like about Crafting Seitan is the wide variety of recipes.

If you’re new to seitan, you’ll be surprised how versatile this protein-packed ingredient can be. Yes, there are burgers and sausages, but there are also drumsticks, lunchmeats, steaks, holiday roasts, and everything in-between.

Even if you’re unfamiliar with the cooking techniques, the instructions are clear enough for those with little to no cooking experience.

In regards to cooking times, these recipes need a lot of it. Not in the preparation of the ingredients but more in the cooking and curing portions of the recipes. These are not your 30-minute or less weekday meal recipes; they’re the plan-ahead and have on-hand meats to create meals around.

You’ll need vital wheat gluten for every recipe in this book. While there are a few special ingredients like beet and mushroom powder, most are common ones you can find in well-stocked grocery stores.

You may even already have them in your pantry.

After reading through Crafting Seitan, I decided to make the Vegan Pepperoni from the Hard Sausages chapter. I had pizza on my mind.

Putting the ingredients together and forming them into the two packages was easy enough. So was cooking them in a pressure cooker for an hour. Once done, I cooled them before storing them in the fridge for eight hours to optimize their texture and make them easier to slice. Easy.

The next day I made some pizza dough in the Vitamix. Yes, you can do that. Once I had my dough, I topped it with onions and slices of the finished pepperoni and tossed it in the oven to bake. This opinion might be personal, but one of the best things about pepperoni is how it crisps up when cooked, each round delicately cupping a tiny pool of grease. And to be honest, I’ve always found store-bought vegan versions a bit lacking in this way.

That’s why I wanted to test out this recipe. Can homemade vegan pepperoni beat the store-bought versions?

This pepperoni was firm and toothy, just like I expected it to be. Rich with flavor, I could really taste the smoky paprika mixed with the fennel seeds. I like a lot of heat and spices in my food, so I’d bump up both the fennel and the crushed red pepper the next time I make it.

But does it crisp when cooked? Happily, yes. They even curl a little as their non-vegan counterparts do. The key is to slice them as thin as possible.

VARIATION: For individual snack-sized pepperoni sausages, or pepperettes, divide the dough into 6 equal portions. Wrap and steam the dough for 45 minutes.

First, I like that I can choose the type of oil I use and the amount of salt, something I’m unable to do with store-bought vegan meats. Second, the cookbook is incredibly versatile; whatever meaty thing you like, it’s in there.

Finally, the recipes feel familiar, comforting even. I grew up eating the schnitzel my oma made, and I’ve missed it. Even more so now that my oma has passed away. Now I have a vegan schnitzel recipe to make whenever I want to feel closer to my family.