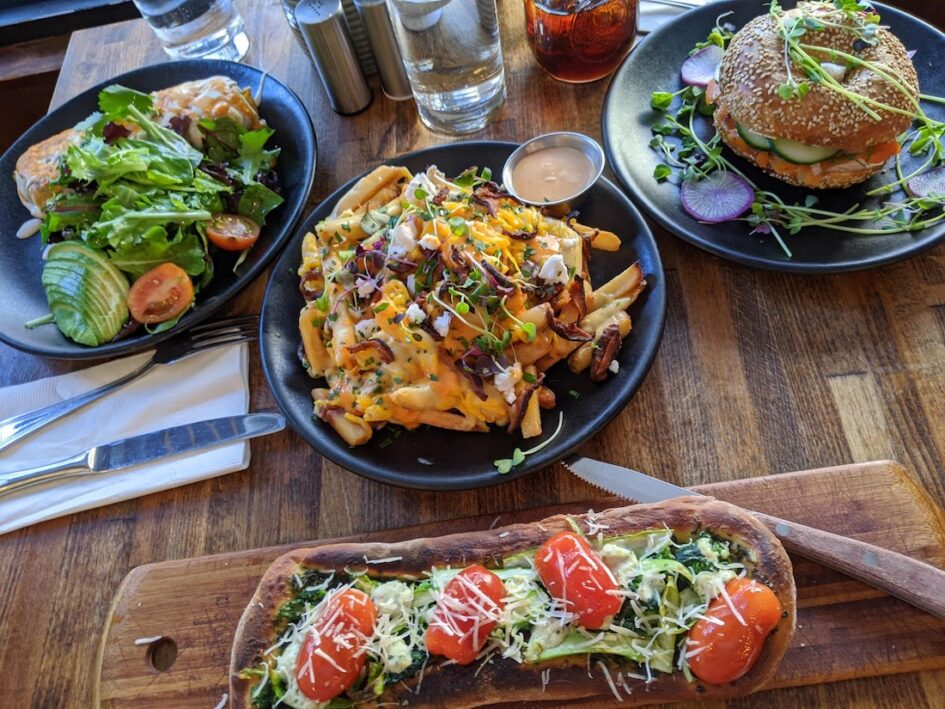 Plenty of restaurants offer fantastic vegan food. No matter where you live or visit, you’ll find  places well worth checking out. So let’s review some quick and easy ways to find the best vegan dining choices near you.

Several online tools excel at spotlighting the best nearby vegan dining choices. The most powerful method involves asking Google Assistant for “vegan restaurants,” or searching this term on Google Maps. You’ll instantly get a list of the most vegan-friendly places near you. You can also search Apple’s Maps app. But Google’s directory is far more extensive and it features extremely helpful user reviews. So if you have an iPhone, make sure to download Google Maps and the Google app. They are essential tools for every traveling vegan.

To discover even more vegan dining possibilities, visit HappyCow.net and VegDining.com. These directories can’t match Google’s depth, but their reviews are written primarily by vegans and are therefore quite helpful.

If all else fails, try TripAdvisor.com. It’s another international directory written by a huge community of reviewers. Even though TripAdvisor does not adequately highlight vegan restaurants, it can still turn up exciting options.

Fortunately, vegan restaurants already outnumber vegetarian restaurants in most part of the world. Dining at vegan restaurants offers a much better experience. You can pick any item from the menu without hesitation. You’re supporting an establishment whose values match up your own. Kitchen cross-contamination with meat just can’t happen. Additionally, even if your order gets messed up, you’ll never find grated cheese in your food.

The Hare Krishna sect likewise operates dozens of vegetarian restaurants worldwide. These spots are usually named, “Govinda’s.” As with Loving Hut restaurants, each Govinda’s is independently owned, so the menus differ at each location. Govinda’s restaurants usually offer Indian-style buffets. Many dishes contain butter or cheese. But in nearly all cases the staff can point out several delicious vegan options.

If you can’t find vegan restaurants nearby, countless mainstream restaurants serve delicious vegan food. Familiarizing yourself with the most vegan-friendly cuisines will enable you to order with confidence.

Some cuisines are are filled with wonderful vegan dishes while others (For instance: Colombian, Korean, and French restaurants) have little to offer. So let’s now run through the cuisines that are especially welcoming to vegans.

When there’s no vegan restaurant nearby, I will look for Middle Eastern food. Any restaurant that’s Lebanese, Israeli, Egyptian, Jordanian, or Iraqi will offer a number of satisfying vegan dishes.

Whether served in wraps or pita bread, falafel and hummus are two of the tastiest and most satisfying foods in existence. Tahini dressing is usually vegan. A delicious creamy eggplant dish called Baba ghanouj is often vegan as well. But in both cases ask if they contain yogurt. The easiest way to find restaurants serving this cuisine is to search Google Maps for falafel.

Tabbouleh is a healthy and delicious Middle Eastern salad that’s invariably vegan. It’s made with bulgur wheat, ripe tomatoes, parsley, and olive oil. If standard green leafy salads don’t do it for you, you must give tabbouleh a try. Middle Eastern restaurants also consistently serve some of the most delicious lettuce-based salads you’ll find anywhere.

Ethiopian cuisine is another fantastic vegan-friendly possibility. The food has wonderful flavors, and the vegan dishes will really fill you up.

As with Middle Eastern food, dairy products rarely make their way into Ethiopian cooking. As long as you don’t order meat, you have a good chance of getting an entirely vegan meal. Just confirm that the restaurant in question cooks their stews with vegetable oil rather than butter. Also specify “no dairy” to eliminate the chance they’ll garnish your meal with sour cream.

Italian food provides another excellent restaurant option for vegans. The most important thing to know is that fresh pasta usually contains egg whites, whereas most dried pasta is vegan. This means that the spaghetti with marinara sauce at any Italian restaurant should be vegan (but specify no Parmesan!) Same goes for pizza with the cheese left off. The crust at independently-owned pizzerias is nearly always vegan. These places make their dough from scratch, using just flour, yeast, water, a pinch of sugar, and salt. But several chains, including Dominos and Pizza Hut, add milk products to some of their pizza dough.

The salads at Italian restaurants are typically very good, and easy to order vegan.

No cuisine offers more vegan possibilities than Mexican cooking. Unfortunately, many Mexican restaurants are either tricky or nearly impossible for vegans. Rice may be boiled in chicken stock. Beans are commonly fried in lard. And even the guacamole can include sour cream. Not so long ago, most wheat-flour tortillas typically contained animal fats, but that’s no longer the case.

Indian food is hands down the most vegetarian-friendly cuisine on the planet. Yet Indian restaurants are difficult for vegans to navigate since dairy products appear in a great many dishes. They’re often used in small quantities and are therefore impossible to  detect.

You nevertheless have several reliably vegan Indian options. One of the most popular Indian dishes, chana masala (curried chick peas), is nearly always vegan. Chances are you can also get rice or chapati or roti that’s cooked without butter. Just ask to find out.

South Indian food is quite often dairy-free. Since cows are poorly suited to hot and arid climates, authentic South Indian cooking doesn’t use much dairy. Probably the most popular vegan South Indian dish is dosas. These are gigantic pancake rolls made from fermented lentil batter. Dosas are delicious and no other cuisine offers anything similar. They’re commonly stuffed with spiced potatoes and curried vegetables. On the side, you’ll often get spicy red and cooling coconut dipping sauces. Fancier restaurants may add a little ghee (clarified butter) to your dosa, so just ask to leave it off.

When you’re traveling and short on time, vegan fast food can save the day. Because fast food chains have standardized menus, you can easily discover all their vegan options. Every major fast food chain publishes complete ingredient information on their website.

Many of the largest chains, including Taco Bell, Burger King, and Subway, have solid vegan options. And that’s just the beginning. Discover all your best choices by visiting our vegan fast food guide.

The vast majority of hamburger chains now offer veggie burgers. Unfortunately, the vegan status of these burgers varies from chain to chain. Burger King and White Castle both feature the Impossible Burger. These items are vegan if ordered without the mayonnaise or cheese.

Many fast food restaurants cook their veggieburgers on the same grill as hamburgers—a huge turn-off to many vegans. Some places will instead microwave your patty upon request.

The restaurant industry classifies Chipotle, Qdoba, and Taco Del Mar as a step up from conventional fast food. And from a vegan perspective, these chains serve vastly superior food. At any of these restaurants you can order a vegan burrito stuffed with rice, beans, guacamole, salsa, and lettuce. And both Chipotle and Qdoba also offer delicious seasoned tofu as a filling.

Chipotle deserves additional praise for publishing a list featuring every single vegan item on the menu.

The industry calls restaurants like Applebee’s, TGIFriday’s, and Denny’s, “casual dining.” Vegans tend to avoid these places. Some of these chains have OK vegan options, and things are slowly improving.

Casual dining restaurants often use packaged frozen meals that the kitchen staff merely heat up, often with a microwave. Employees typically won’t know what’s in your food since they don’t make it from scratch. But with a little online research, you can find out which menu items are vegan. Just visit the chain’s website and hunt around. In most cases, you can find the ingredients for every item on the menu.

Vegan Foods at PF Chang’s, the Olive Garden, and Denny’s,

PF Chang’s is one shining exception to the paucity of vegan dining options offered at casual chains. Their vegan offerings are terrific and inexpensive, and serving sizes are huge. Everything in PF Chang’s menu  section devoted to vegetable-based dishes is vegan. They do add cane sugar to some of these items. Cane sugar factories often rely on filters made of bone char, but that’s worthy of much concern.  This method of sugar filtration generates no meaningful income for the meat industry.

Steak and seafood restaurants are obviously the least appealing places for vegans. Even so, most steakhouses offer good salads, either made-to-order or from a salad bar. Add Italian dressing and skip the cheese, egg, and croutons and you should be in business. At the best steakhouses, you can order an excellent vegan dinner salad.

Seafood restaurants are the worst of all choices for vegans. You won’t find anything appealing on the menu. If you do get dragged to one of these places, you can order pasta with olive oil and vegetables. Every seafood restaurant has these ingredients on hand. Granted, the whole experience will still smell like fish.

It’s easy to improve the vegan options in your community. Just use platforms like meetup.com to organize restaurant gatherings with other vegans. Many non-vegetarian restaurants will gladly prepare special vegan menus for large gatherings. All you need to do is work things out with the owner in advance.

Remember that restaurants always want new business. So when customers politely request better vegan options, many establishments are quite receptive. But keep in mind that your waitstaff doesn’t make the decisions. So always communicate these sorts of requests to the manager or owner.

Even if the place you live in isn’t yet vegan-friendly, one day it will be. And you can be a driving force to speed that transition.

Even Worst-Case Scenarios Aren’t So Bad

Despite all the fantastic vegan dining options worldwide, you may still have trouble finding good vegan restaurant food in small towns. In these cases you can avoid going hungry by shopping at local grocery stores. A hotel kitchenette will enable you to cook basic grocery items like canned beans, rice, and pasta. See our vegan travel guide for additional advice.

Every day, new vegan restaurants open. The areas of the world that pose serious challenges to vegans are receding fast. And all you have to do is follow the tips I’ve laid out here to discover some of the most delicious vegan food you’ve ever eaten.

For further reading: please see our vegan travel page, our vegan cuisine guide, and our guide to vegan-friendly fast food.