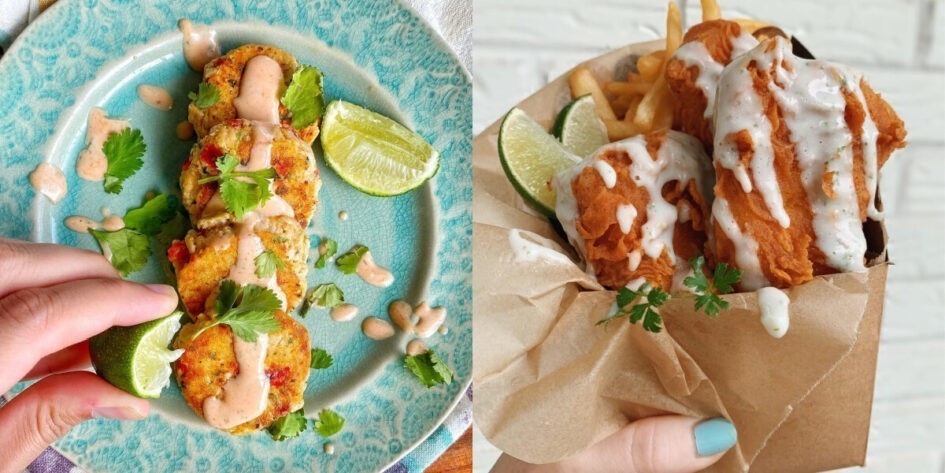 Each year, more fish are killed for food than all other animals combined. Scientists have proved that fish are smart, complex animals who feel pain, practice cultural traditions, and have cognitive abilities that often match or exceed those of their fellow vertebrates. In the fishing industry, these animals are subjected to extremely painful deaths—they’re impaled, crushed, suffocated, cut open, and gutted, often while still conscious. Commercial fishing is also a major contributor to ocean pollution—an estimated 46% of the Great Pacific Garbage Patch composed of fishing gear.

In response to the unsustainable, inhumane practice of killing ocean animals for food, vegan brands are creating innovative, animal- and planet-friendly seafood products. We’re recognizing some of the best brands in the business and highlighting the delicious vegan seafood products that they’re creating.

Good Catch became the first vegan seafood brand to partner with a major chain restaurant in July 2021 when Long John Silver’s tested the brand’s Fish-Free Fillets and Crab-Free Cakes at four of its locations. We hope more chains will continue to partner with Good Catch, but until then, you can find its fish-free sticks, fillets, burgers, and crab cakes online or near you at select grocery stores. Crabs are caring mothers and courteous neighbors—they should be left alone, not ripped out of their homes in the ocean.

In the commercial fishing industry, large trawling nets are used to target cod and other fish commonly used for fish and chips, but they don’t only kill the targeted fish—hundreds of tons of animals are squeezed into the nets, dragged across the ocean floor, and then ripped out of the ocean. Brands like Gardein are helping to put an end to this practice by creating fish-free fare, including its Golden Fishless Filets and Mini Crabless Cakes.

May Wah Vegetarian Market is a PETA Business Friend that has more than 10 varieties of vegan seafood products perfect for all of your culinary needs. The Vegan Red Spot Prawns are one of the brand’s most popular and versatile items, but it also offers Vegan Lobster, Vegan Squid, and Vegan Abalone. Purchase them online at Lily’s Vegan Pantry, or visit the storefront in New York City.

BeLeaf’s vegan shrimp is commonly served in restaurants, so you may have tried this brand already! It’s made from konjac, a starchy Japanese root vegetable that’s full of fiber. By choosing vegan shrimp from brands like BeLeaf, you help save these fascinating crustaceans, who are being fished to the brink of extinction. You can purchase these through various online retailers.

Salmon, like all fish, are smart and inquisitive. They have long-term memories and recognize and learn from each other, and some species even use tools. Sophie’s Kitchen is helping to save salmon and other sea life with its protein-packed vegan seafood. Try the Plant-Based Smoked Salmon on a bagel with vegan cream cheese, or snack on some crispy breaded Plant-Based Shrimp. Find these and other products at various grocery stores nationwide.

Scallops flee when they’re threatened by predators, which demonstrates that they have the same instinct to avoid pain as humans and other animals do. PETA Business Friend The Plant Based Seafood Co is certainly blowing minds with its Mind Blown Dusted Scallops, which are perfect on their own or served on top of your favorite pasta. The brand also makes Coconut Shrimp, Dusted Shrimp, and Lobster Crab Cakes that give you the taste of the sea without the animals. Purchase them online or at select grocery stores.

Some tuna used for food are raised on crowded “farms,” where they often suffer from parasites and diseases. Kuleana is a PETA Business Friend that’s creating vegan sushi-grade tuna without the suffering and sickness. You can try it out at Poké Bar locations nationwide or Erewhon Markets in California.

PETA Business Friend Plant Based Foods is the U.S. distributor of two vegan seafood brands, Vegan ZeaStar and Cavi-art. Vegan ZeaStar makes vegan salmon and tuna sashimi for use in sushi rolls, along with calamari and two types of shrimp. Cavi-art offers orange and black vegan caviar, which have a briny, salty taste perfect for garnishing. Find both through online retailers and select stores.

Worthington’s textured meatless tuna is flaky and flavorful. Mix it with vegan mayo and your favorite spices for a tuna salad, or use it to make vegan crab cakes or tuna ceviche. Find it at select stores or purchase it online.

Jinka’s spreads come in three different flavors: Original, Lemon & Dill, and Spicy. All are delicious enough to eat on their own or perfect on crackers or sandwiches. Find them online or at your local Whole Foods.

While it’s not available in the U.S. just yet, we had to mention New Wave Foods. This company will start distributing its New Wave Shrimp to retailers throughout the country by 2022, and it plans to add other vegan seafood items like lobster, scallops, and crab.

Going vegan is the best thing that you can do to save animals and our planet. Take our 3-Week Vegan Challenge to jump-start your journey, and learn more with our helpful guide:

Find Out How to Go Vegan TODAY

The Vegan Society is relaunching its Youth Membership offer

The Best Festive Vegan Drinks On Offer This Christmas