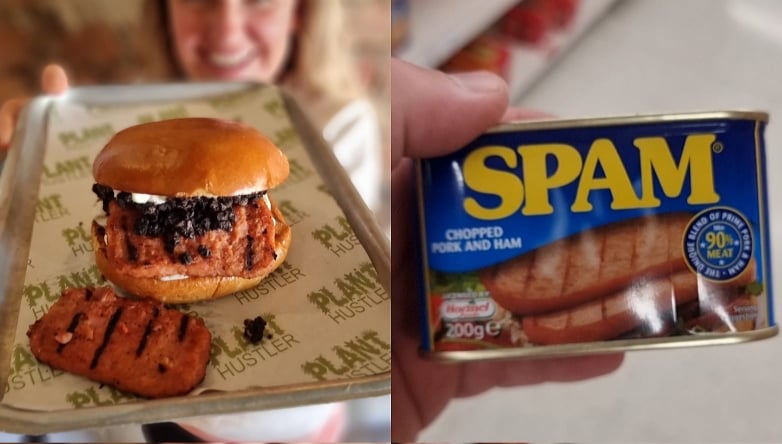 Vegan Spam goes Beyond conventions, but what does it taste like? We head to Bournemouth to find out

The latest creation by the owner, Aaron Bryans, is in collaboration with major meat alternative brand OmniPork, who have recently launched vegan ‘Spam’ into the UK market.

We headed down to the Plant Hustler cafe in Boscombe to see what was on the menu.

What on earth was the guy who thought this up smoking? We hear you say. As crazy as it sounds, this was actually a creation by McDonald’s in China – and it was apparently VERY popular. But how will the British public react to it?

Plant Hustler have mimicked the McDonald’s burger to the tee, but obviously using a plant-based Spam alternative.

The burger was quite large when it arrived in a brioche bun, with two pieces of Spam and a good serving of Oreo crumbs (whether that’s a good thing or not, we will find out). In all honesty, it was the Oreo and mayo pairing that worried us the most.

As strange as the concept is, we actually quite liked the burger. I mean, we are glad we tried it! Life is for living and now we can die knowing that at least once we tried a Spam & Oreo Burger.

Watch our short video on the Spam burger below

Pork is often paired with sweet things, and what’s sweeter than Oreos – nothing! The Spam alternative was gelatinous and salty, and the mayo’s slight sharpness help cut through the fatty texture & taste. The Oreos were soft with a little crunch, and as predicted balanced out the savoriness of the Spam.

In conclusion, it was such a fun burger and no animals were harmed in the process, so we can recommend anyone heading down there and giving it a go.