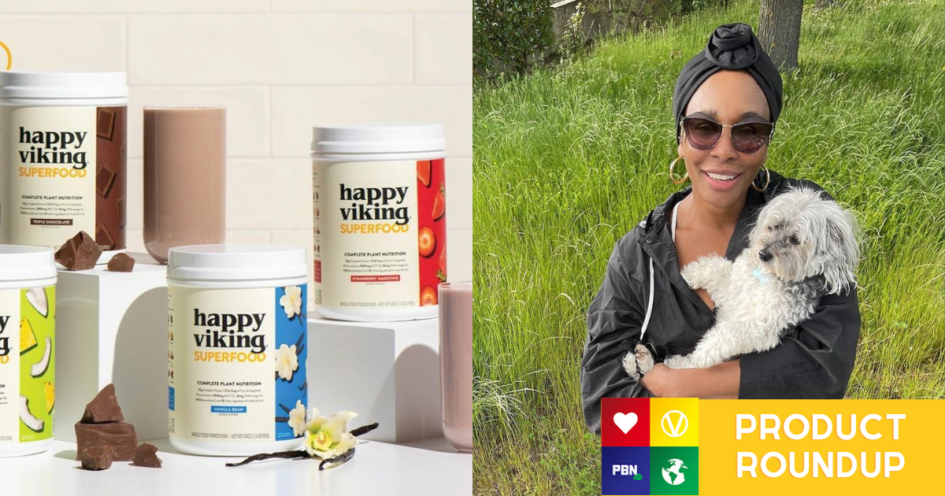 There are some big names releasing plant-based products this week: from tennis legend Venus Williams extending her vegan protein brand. And, our pizza prayers are being answered by the likes of Miyoko’s Creamery, Beyond Meat, and Banza.

Here are our top releases.

Under Happy Viking, Williams is launching a new line of Superfood Plant Nutrition Powders, complete with 20 grams of protein in each serving.

‘After years of research and working with top-nutritionists, I’m so excited to bring you my Complete Plant Superfood Nutrition’, said Williams upon announcing the news.

This week, Miyoko’s Creamery launched a Liquid Vegan Pizza Mozzarella with a view to revolutionizing the vegan ‘pizza cheese’.

Ingredients include cashew milk, tapioca starch, mushroom extract, and sea salt. It’s available in the US for $6.99.

Beyond Meat and Banza team up to launch vegan pizza

Vegan meat giant Beyond Meat has joined forces with Banza, a company that creates products made from chickpeas, on a new vegan pizza.

The frozen pizza, the Banza Supreme, will feature Beyond Sausage. And, provide a ‘convenient and accessible way for people to try Beyond Meat’, a spokesperson told Yahoo Finance.

US meal delivery service Freshly has launched its first vegan menu, just over a decade since its launch.

The plan starts at $8.99 a meal, and is delivered fresh to customers’ doors.

Manufacturer Atlantic Natural Foods has just announced the launch of its reformulated seafood, TUNO. The fish-free product mimics tuna and is complete with plant-based omega-3s.

Moreover, the company says TUNO strikes the right balance of ‘flakiness’ and density as well as a fish-from-the-sea flavor.

‘Our commitment to sustainable and culturally inspired foods make our meals enjoyable for the consumer and better for the planet’, brand manager Laura Lapp told PBN.

Dutch brand, Lazy Vegan, is bringing its vegan-ready meals to Waitrose stores across the UK.

It’s brand new Italian Risotto can be stir-fried straight out the freezer within just eight minutes. And, it comes complete with Italian herbs.

Co-founder Bas Dijkstra said: “With strong brand awareness and loyalty among vegans and vegetarians. Now, is the perfect time to take our growth to the next level via a broader ‘time poor’ consumer who is conscious about the impact of cutting down on meat for their health and the environment.”