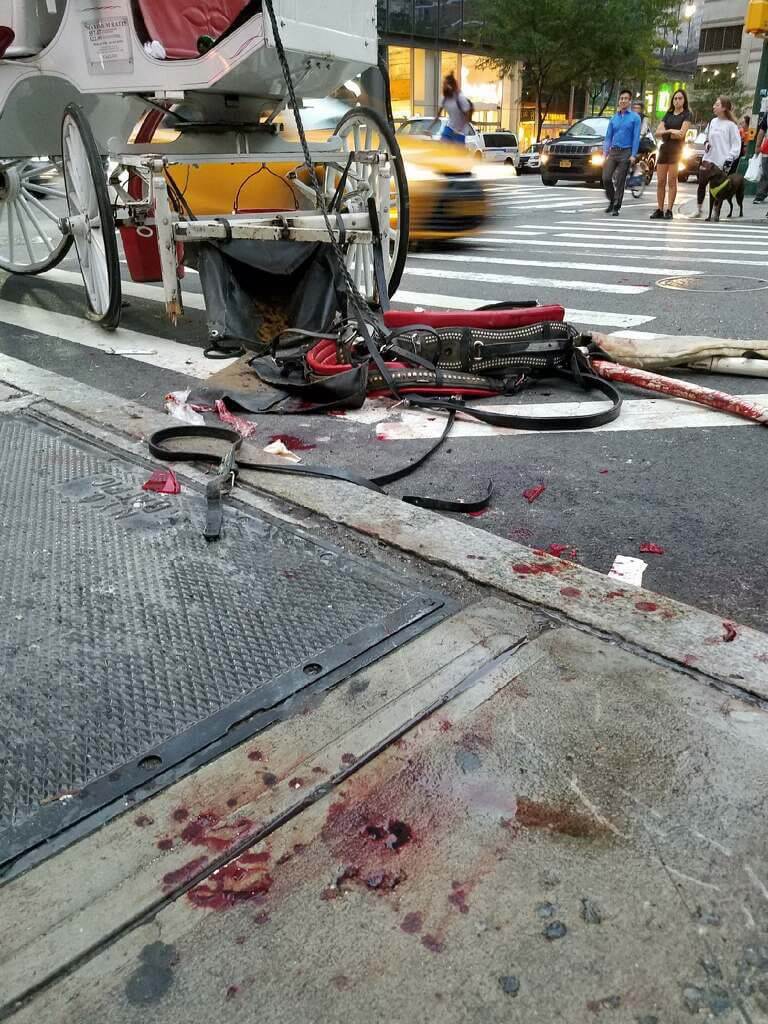 New York City tourists surely don’t visit the Big Apple hoping to see bloodied animals on the streets, and horses certainly don’t sign up to be used in the cruel and dangerous carriage industry. Yet here we are, disturbed and frustrated after yet another violent incident. This time, a gory crash left a Midtown street and the heavy carriage that a horse named Chief was forced to pull covered with his blood.

💔Injured horse violently bucking and trying to get off the pavement after horrific crash with car yesterday. How does @NYCMayor, @NYCSpeakerCoJo + @NYCCouncil feel knowing they enable this abuse and have the power to END IT? RETWEET to #BanHorseCarriages pic.twitter.com/u4adrFCFA2

So, is this the tragedy that will finally force city officials to ban horse-drawn carriages? It’s the question that PETA, NYCLASS (New Yorkers for Clean, Livable, and Safe Streets), and countless heated Twitter users are asking—and we need 10 seconds of your time to help ensure that the answer is “yes.”

Footage of the “[b]loody aftermath of yesterday’s horrific NYC carriage horse crash” is perhaps just as haunting as the video above showing the “[i]njured horse violently bucking and trying to get off the pavement.” According to the New York Post, the horse and a BMW sedan crashed near an intersection in Midtown. “The NYPD said the animal suffered a gash to [the] leg and was treated by a veterinarian,” the outlet reported.

🚨Bloody aftermath of yesterday’s horrific NYC carriage horse crash – witnesses say the horse plowed into the car, then lay on the ground for several minutes, oozing blood until frantically trying to rise – slamming into the car again – car pieces were flying. #BanHorseCarriages pic.twitter.com/fCBOrxjode

Photographs of the aftermath, also posted by NYCLASS (a local nonprofit animal rights organization), show the street and sidewalk covered with large splotches of blood. “The carriage was heavily damaged and its shafts were also coated in blood”—further confirmation of the violence of the crash.

🚨This is the bloody wreckage of yet another carriage horse/vehicle crash in NYC. How much more violence will it take for @NYCCouncil to end this abuse + danger!? @NYCMayor + @NYPDPaws need to investigate now. Is the horse even alive?We need to get these horse OFF streets now! pic.twitter.com/9om6PP0ruu

PETA and NYCLASS have been calling on the city to put an end to its cruel horse-drawn carriage industry for years. “How much more violence will it take for @NYCCouncil to end this abuse + danger!?” NYCLASS captioned its photos on Twitter. “We need to get these horse[s] OFF streets now!” If New York City continues to engage in speciesism by treating horses as machines—rather than the sensitive, social animals they are, ones who prefer to spend their time grazing in meadows, roaming at will, and playing—it’s not a matter of if another tragedy will strike but when.

Chief and other horses can’t wait for another administration to fail to take decisive action.

After you’ve joined us in urging New York City Council Speaker Corey Johnson to lead the council to ban horse-drawn carriages without delay, please consider sharing this post on Facebook and Twitter. Ask your family, friends, and other followers to speak out against forcing horses to pull heavy carriages full of tourists down busy city streets in all weather extremes.

If you’re visiting an unfamiliar city and you find yourself needing transportation, hail a cab, take the subway, rent a bike from a bike-share service, or simply walk. A carriage ride may be a fleeting moment of entertainment for tourists, but it supports a lifetime of torment and forced labor for horses.

Learn More About the Cruelty of Horse-Drawn Carriages