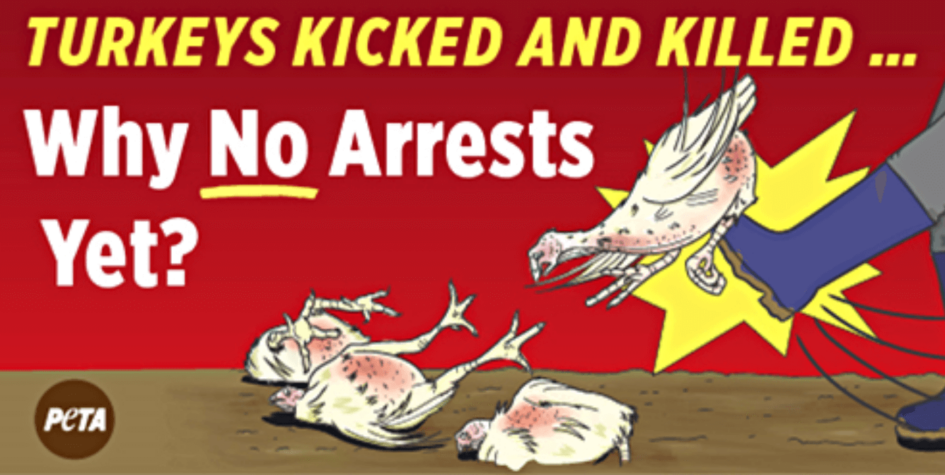 It’s been eight months since PETA shared the findings of our undercover investigation into Plainville Farms with Pennsylvania State Police (PSP), but—despite overwhelming evidence of cruelty to animals—the agency has yet to charge the abusers who were caught on camera kicking, stomping on, beating, and committing other violent acts against turkeys. See for yourself the abuse that PSP is allowing to go unaddressed:

With a billboard that just went up near PSP’s headquarters, PETA is calling out the agency for its failure to file charges against the workers who were caught on video abusing and killing vulnerable birds. 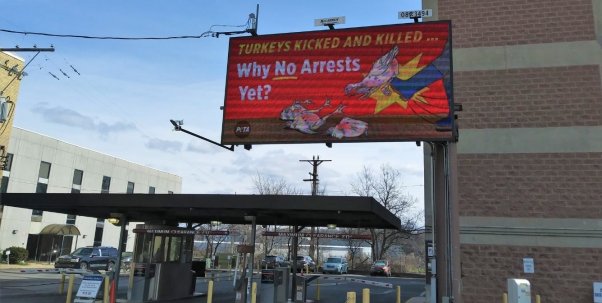 Prior to PETA’s investigation, Plainville was certified as “humane” by Global Animal Partnership (GAP) and claimed that its turkeys were “free from harm”—which our investigation showed to be false. Following the investigation, GAP suspended Plainville’s certification, Whole Foods pulled its turkey products, and Plainville terminated 13 of its workers.

This isn’t the first time PSP has failed animals.

PSP recently refused to pursue other well-documented cases of cruelty to farmed animals, including in March 2020 when the agency announced that no charges were to be filed following PETA’s investigation into Reitz Dairy Farm, where a worker struck a cow nearly 60 times with a cane and other cows were denied care for massively swollen joints seeping blood and pus.

PETA Senior Vice President of Cruelty Investigations Daphna Nachminovitch weighed in, including with a simple action that everyone can take:

Plainville Farms employees were caught on camera mock-raping and stomping on turkeys, throwing hens at each other like basketballs, and leaving battered birds to convulse in agony. PETA is calling on the Pennsylvania State Police to finally hold these abusers accountable and is appealing to everyone who’s against cruelty to animals to prevent more abuse by eating vegan.

Did you know that turkeys are caring parents and spirited explorers who feel pain or that they like to chirp, cluck, and gobble along to their favorite tunes? No one has any right to kick or beat these birds—or to eat them. Going vegan is the best way to help turkeys and other animals. Check out our “How to Go Vegan” guide, and order a free vegan starter kit. Click below to do more for turkeys and other animals—including consumers like you—by urging Whole Foods to stop duping shoppers with false “humane meat” claims.

Charity or Cruelty? Watch PETA’s New Video About Animal-Gifting Programs, Then You Decide