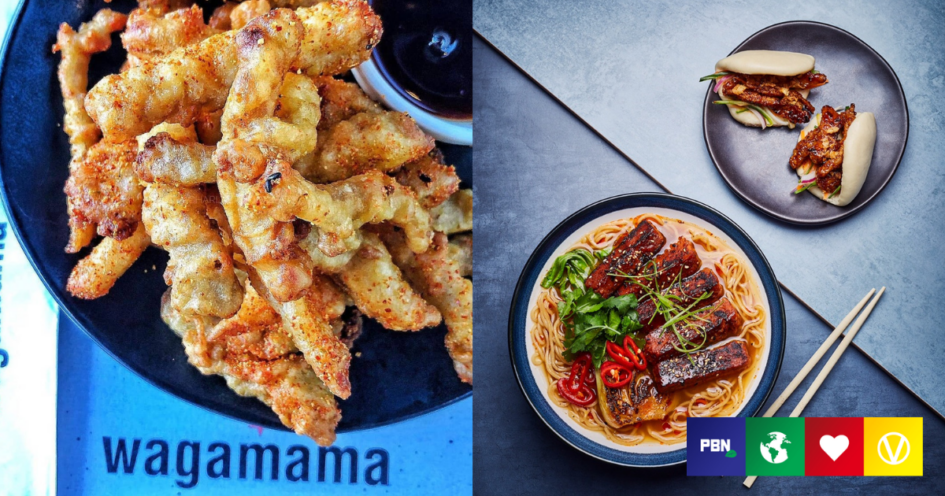 British restaurant giant Wagamama has announced it’s the UK’s ‘first’ high-street restaurant chain to make over half its menu vegan-friendly.

It comes with the launch of its autumn menu today, created to help consumers ‘fight against climate change’.

Giving plant-based offerings an equal share on its menu is part of the chain’s 2021 Positive Action Plan.

The ‘Short Ribs’ are made from a mushroom and soy protein, and jackfruit to create the chicken alternative.

It comes ahead of the UN Climate Change Conference (COP26) next month.

In light of this, Wagamama says it hopes to incentivize guests to pledge a ‘small choice for a big change’ by eating more plant-based foods. As a result, it’s offering a free vegan side throughout November.

So far, 8,000 guests have made pledged to be part Plant-Pledge Campaign, which launched last month.

‘This menu launch marks an important moment for us as a business’, said CEO Thomas Heier in a statement sent to PBN.

‘We’ve been making choices, both big and small, to tread more lightly on our earth’, they added.

Heier also said: “We’re privileged to have restaurants in most major UK cities, therefore feel a real responsibility and exciting opportunity to make plant-based food as accessible as possible to all guests no matter their dietary preferences.

“We feel passionately that plant-based food can be just as nourishing and delicious.

“We hope our new menu will influence a positive spike in plant-based menu participation from our guests.”

Wagamama Confirms 50% of Menu Will Be Plant-Based By October