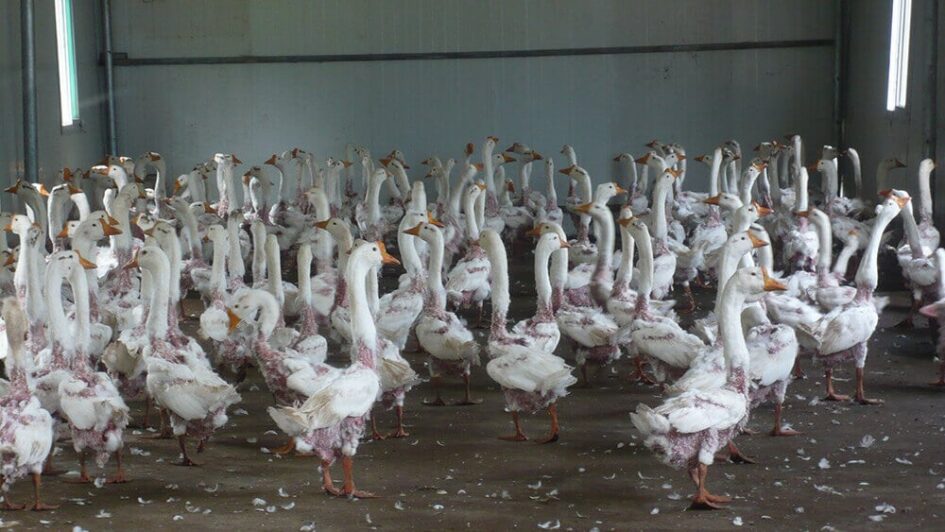 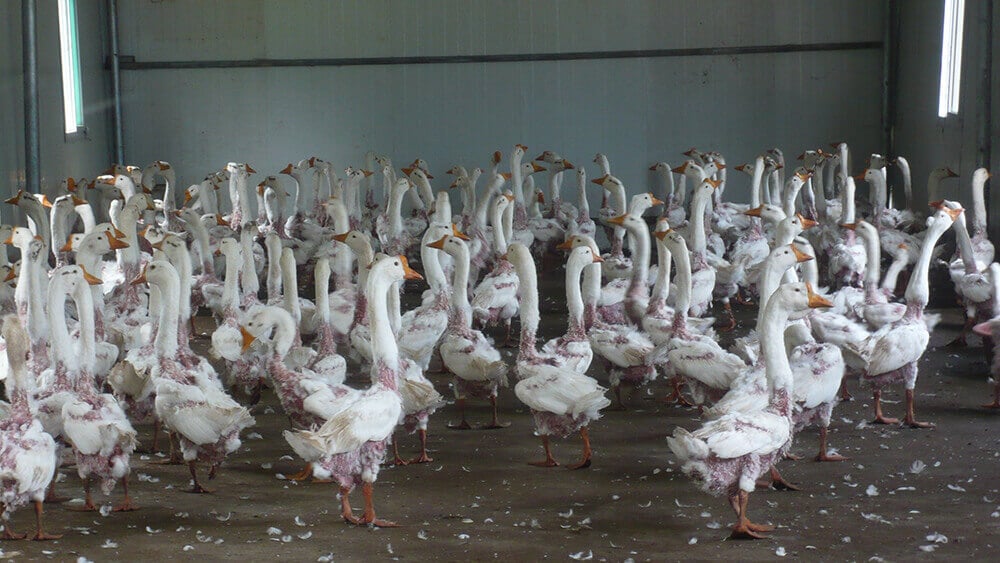 Is Down Production Cruel?

In 2015, PETA entities, including PETA Asia, set out to visit farms across China and see firsthand the various ways in which down was obtained. Investigators saw workers rip geese’s feathers out—leaving open, bloody wounds—while the birds were still conscious. Many birds struggled and cried out in terror and pain as workers tore their feathers out, while others froze, paralyzed with fear.

In 2016, a PETA video exposé of Culver Duck Farms Inc.—the second-largest duck slaughterer in the U.S.—revealed that ducks were kicked, thrown, slammed against walls, and kept in isolation for weeks. Culver, which slaughters 25,000 ducks every day, boasted that its duck feathers “are in high demand for down,” and a supervisor told PETA’s eyewitness that 30,000 pounds of feathers are sent to China weekly. Here’s a look at what anyone buying duck meat or down-filled jackets could be supporting:

Things at Culver apparently didn’t get any better for ducks in the years that followed. In February 2022, a Culver whistleblower’s video and photographs showed injured and dying ducks, others who were suffocated and buried alive, and dozens of live ducklings who were ground up while still conscious. According to the whistleblower, Culver ground up dozens of ducklings every day in its hatchery. Ducklings there whom workers deemed unprofitable were reportedly thrown into a grinder while they were still chirping.

In 2017, PETA’s eyewitness exposé of James Valley Colony Farms—which bred 130,000 geese per year for their feathers and flesh—revealed that workers rounded up panicked animals, grabbing and carrying them by the neck, and crammed them into densely packed cages for transport to slaughter. Some geese were left in the filthy crates for up to 24 hours without food or water, including during a trip to the slaughterhouse that lasted over five hours.

For 13 months, between November 2021 and November 2022, PETA Asia investigators visited duck farms and slaughterhouses in Vietnam connected to companies that sell “responsible” down, including GAP Inc., Guess, and H&M, exposing unspeakable cruelty to ducks. What they uncovered shows why even purportedly “responsible” down is never ethical or humane. See the shocking footage for yourself and take action for ducks by urging companies to end their use of down:

A disturbing 2022 PETA undercover investigation into Maple Leaf Farms, which claims to be North America’s leading duck producer and to sell “humanely raised” duck meat, reveals that ducklings were tossed around and ground up alive the very day they hatched. This video shows what you could be funding when you buy roast duck, duck sausage, duck-fat French fries, or a down comforter:

In 2022, PETA Asia investigated RDS-certified goose farms in Russia—which exports down to countries around the world—revealing that geese were beheaded with a dull axe while they were still conscious. See what happens to geese who are slaughtered for “responsible” down:

The same year, PETA Germany released undercover footage from inside a Polish slaughterhouse that specializes in killing ducks and geese for their feathers and flesh. The feathers are then sold to fashion and bedding manufacturers all over the world. Watch as workers roughly handle, kick, electrocute, and cut the throats of ducks and geese, many of whom were likely still conscious:

It’s the Eye-Opening Event of Spring! Join PETA for a Behind-the-Scenes Look at the Teams Helping Animal Companions Around the Globe