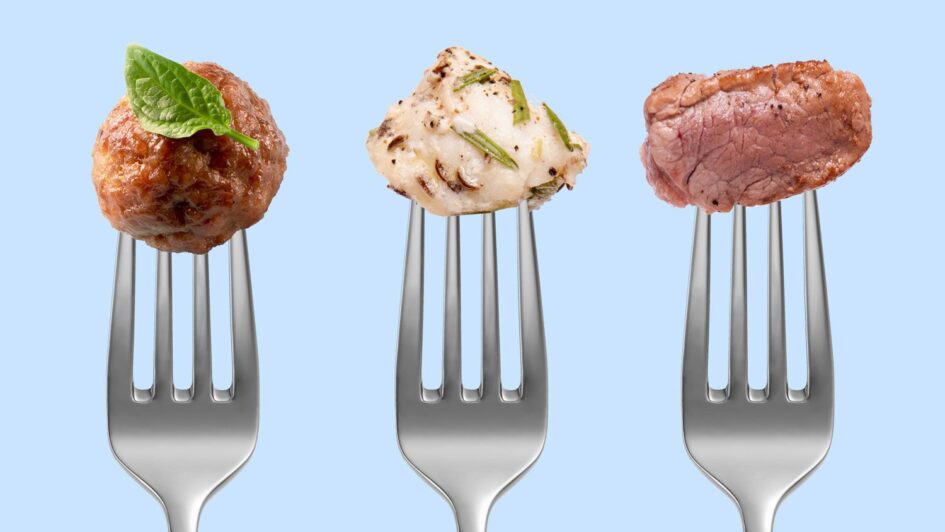 Cultured meat—genuine meat grown from animal cells in a lab—sounds like science fiction. And that’s a pretty accurate statement. References to slaughter-free meat grown in a lab go back decades in the genre, and most recently, it showed up in this year’s hit dystopian game Cyberpunk 2077, where you can buy a product called “vat-grown meat.” (Which is a callback to the slaughter-free meat from William Gibson’s 1982 novel, Neuromancer.) But, cultured meat is closer to reality than sci-fi would have us think. In the very near future, humans could be sampling high-grade salmon made from fish cells or a crisp chicken cutlet grown in a bioreactor with regularity.

Man-made meat has gone by many names in sci-fi and in most cases, the reason it exists in the first place is because in these dystopian settings, humankind has overexploited the Earth’s resources to the point of environmental destruction. (Oh no, this is sounding a little too familiar. I’m not ready to live in a Mad Max world, even if the fashion is killer.)

Cultured meat, also known as cultivated meat, cell-based meat, and lab-grown meat, is a fast-growing space for this reason. But, it still faces many challenges in terms of bringing it to scale in a way that could compete with the $1.8 trillion, environmentally destructive global meat market. Still, the hope is that it could displace conventional animal products with something more sustainable, and consultancy firm Kearney estimates that it could represent 35 percent of the market by 2040.

Cultured meat is made through cellular agriculture. The process removes the steps of raising and slaughtering farm animals and aquatic creatures for food, thus greatly reducing the need for vast quantities of land, water, and other resources, as well as the carbon emissions generated by industrial animal agriculture. (It has been argued in the past few years that cultured meat could be worse for the environment due to energy use, but according to studies commissioned by the Good Food Insitute, the use of renewables could reduce cultured meat’s carbon footprint by as much as 80 percent.)

Instead of beginning on a farm, making cellular agriculture starts with acquiring and banking trillions of animal stem cells—so it’s not entirely cruelty-free—which are then grown in industrial tanks called bioreactors. The cells are fed a cell culture medium that contains basic nutrients such as amino acids, glucose, and vitamins, which is supplemented with other growth factors. Doing this sets the cells up with an environment that imitates how cells within an animal’s body use nutrients.

At the moment, the majority of companies use fetal bovine serum (FBS), a controversial and expensive ingredient that can account for 90 percent of the cost of cultured meat, as the growth medium for cells. (This serum is made from the blood of cattle fetuses removed from pregnant cows during slaughter.) On average, FBS costs $200 per liter, and cultured meat companies must replace it every two to three days as the nutrients are depleted, which adds to the current high cost. But, innovation is constant in the space and several startups are working on or have developed more economical novel replacements. South Korea’s Seawith leverages algae. UK-based firm Multus Media aims to sell its FBS-free serum, created through microbial fermentation, for under $1 per liter within the next five years.

It’s not enough just to feed the cells. In order for these trillions of cells to become actual cuts of steak, chicken, or even fish maw, they must be transferred to a scaffold which, as the name suggests, provides the structure for them to imitate the architecture of an appetizing piece of meat—muscle, fat, and connective tissue. (Or, in this case, the cytoarchitecture, the arrangement of cells in a tissue. Save that word for Scrabble night.)

Scaffolding can be made from a variety of biomaterials, including algae, plant cellulose, proteins such as zein (which is also being used to improve the coveted stretchiness of vegan cheese), or chitosan, a polysaccharide derived from crustaceans, yeast, or fungi. And to assemble it, companies can rely on technologies such as 3D printing or mycelium, the complex root structure of fungi, to name a couple of examples. In this still burgeoning space, scaffolding and its assembly materials vary from company to company.

When brought to scale, the process is expected to take between two to eight weeks on average and can vary greatly from company to company. It takes California-based food tech company Eat Just, best known for its vegan egg and mayo, 14 days to make its cultured chicken meat sold under its Good Meat division. (The average chicken takes about 45 days to go from egg to slaughter.) Meanwhile, San Francisco-based cell-based seafood startup Wildtype takes about one to two months to produce cultured salmon from start to finish. Start-to-finish times are very subject to change as new advancements promise more efficient production.

Big Food (and government) has eyes on cultured meat

At the moment, there are more than 75 companies in the cell-cultured meat space, producing proteins including chicken, pork, beef, lobster, and even more ethical foie gras.

Cultured meat companies received record investments in 2020, according to the Good Food Institute, and the space has garnered investments from major players in the food industry such as Tyson Foods, Cargill, and Brazil’s BRF SA, one of the world’s biggest food companies. This summer, Nestlé became the biggest food company to get behind meat grown from animal cells, announcing a partnership with Israel’s Future Meat Technologies.

Investments and interest in cultured meat are far from limited to the private sector. The French government backed Gourmey, a company that’s developing cultured foie gras, via the state-owned investment bank Bpifrance. The Spanish government has invested in BioTech Foods and NovaMeat. The U.S. government put money into cultured meat research earlier this year. In Singapore, the government backed a S$110 million R&D facility at the National University of Singapore. Israel, Japan, Western Australia, and the European Commission have also all provided monetary support for the development of cultured meat as well.

But, the space still faces major challenges. The first is the aforementioned scalability—can companies grow enough animal-free animal protein to disrupt the meat industry, which produces more than 340 million tonnes of product a year? And, due to rising living standards and income levels in the Middle East and Africa, meat consumption is expected to rise through 2023.

The next challenge is price parity. Even if the product is available, people need to be able to afford it. Thanks to the cell-ag’s industry’s pivot away from FBS, prices are going down. Earlier this year, Future Meat Technologies brought the cost of cultured chicken to $4 per 100 grams and it plans to halve that price by 2022. It’s a steep drop compared to the first cell-based burger produced by Dutch food tech company Mosa Meat in 2013.

Then, there are the hurdles of regulatory approval. So far, Singapore is the only country to have approved the sale of cultured meat—specifically, Eat Just’s cultured chicken. (Singapore is very open to working with food tech companies that are in the early stages, including cultured seafood producer Shiok Meats and Ants Innovate.) Japan is also supportive of food innovation. In Israel, Future Meat Technologies opened a production plant south of Tel Aviv which will allow it to speed up regulatory approval.

And finally, there’s whether or not consumers are actually willing to eat cultured meat. According to a review of 26 studies, the majority of consumers would at least try it. And soon, maybe they will, on a large scale. In a Tel Aviv test kitchen, SuperMeat introduced consumers to its cultured chicken breast—breaded, fried, and placed between a brioche bun. Wildtype intends to open a futuristic sushi bar this fall, where it will demystify cultured fish for consumers by teaching them how it’s made. And Atelier Crenn, a 3-Michelin star restaurant, intends to put cultured chicken on the menu.

The road to the general public’s acceptance of cultured meat almost parallels the early days of the Impossible Burger, the beef-like burger that was first introduced to the public through high-end restaurants such as Momofuku Nishi and plenty of media buzz. And that strategy seems to have worked in its favor, seeing how the burger eventually landed at the Burger King. Maybe someday soon, eating cultured meat will be as easy as ordering it from the Taco Bell menu.