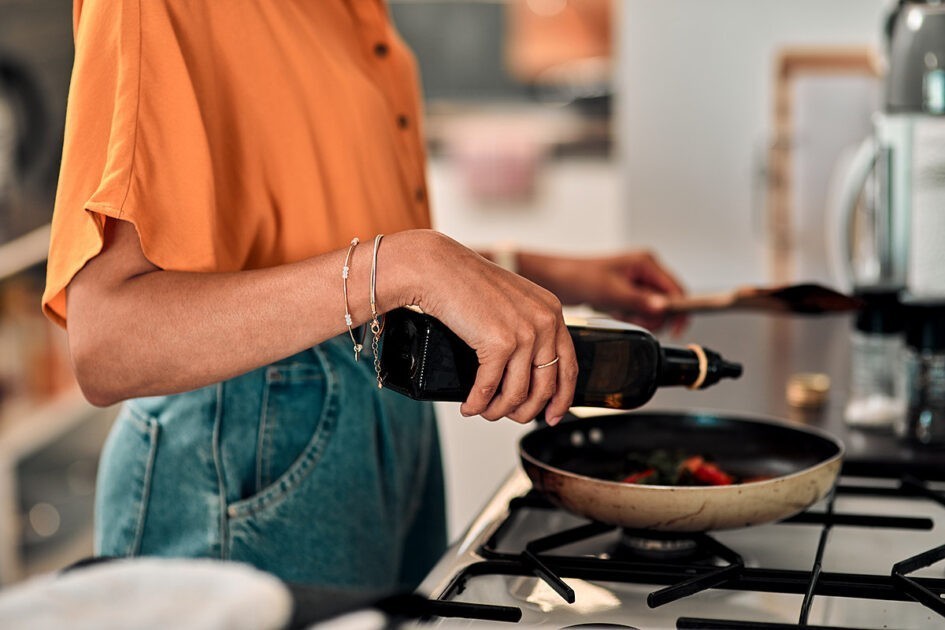 You cook healthy meals, mostly plant-based, but when it comes time to choose the oil to add to your stir fry or for sautéeing, which is better: Canola oil or vegetable oil? (Or another oil altogether?) These two oils look the same, act the same, and are often used interchangeably but they have very different nutritional profiles. Here’s how to make the right decision.

There are dozens of healthy-sounding oils available to choose from, but we’re going to break down the difference between canola and vegetable oil and determine if they are good options to keep in your kitchen. When choosing any oil, first, know what it is made of, then if you are planning to cook with it (as opposed to making a dressing or sauce) check the smoke points.

What’s the difference between canola and vegetable oil?

While these oils may look the same and are often used interchangeably, there is a difference in how they are made and their nutrient profile.

The canola plant was derived from a variety of rapeseed plants, and was created through crossbreeding in order to remove components of the orignal plant to make it heartier and healthier. Although they are both in the mustard or cabbage family, the canola plant doesn’t have glucosinolates and erucic acid like the rapeseed plant. While glucosinolates are compounds that can bring along health benefits, erucic acid is believed to cause adverse health effects according to the Centre for Food Safety.

The name canola comes from the combination of “Canada” and “ola” (which means oil). Nowadays, most of the canola plants are genetically modified (GMO) in order to increase quality and tolerance to herbicides. If you aim to avoid GMOs, then canola oil may not be right for you.

The nutrient breakdown of 1 tablespoon of canola oil is:

The polyunsaturated fatty acid content of canola oil also contains 21 percent of linoleic acid (also known as omega-6 fatty acids) and 11 percent alpha-linolenic acid (also called ALA, which is an omega-3 fatty acid) according to an Oxford Academic nutrition review. Both of these fats are important for overall health and play a role in the healthy functioning of the body.

An imbalance of the omega-6 to omega-3 ratio can lead to adverse health effects. While the omega-6 content of canola oil isn’t much higher than the omega-3 (at a ratio of 2:1), most modern diets are higher in omega-6 fatty acids, since it’s found in a lot of refined foods.

Most vegetable oils are made from soybeans, but can sometimes be made from corn, sunflower, or even canola.

The nutrient breakdown of 1 tablespoon of vegetable oil is:

Consider the cooking stability of oils

All plant oils have various cooking stabilities, meaning some can be cooked at higher temperatures without breaking apart, losing nutrients, and creating smoke. This is important because you want the beneficial compounds of the fats you cook with, but also avoid the cooking fumes. A 2020 article states that consistent exposure to cooking oil fumes could lead to lung cancer.

According to Harvard Health, both canola and vegetable (from soybean) oils are sturdy and are able to be used for sautéeing, stir-frying, or roasting foods since they can withstand the higher temperatures. Other oils, such as extra-virgin olive oil, flaxseed oil, and sesame oil, are better off being used in salad dressings or drizzled on top of foods after cooking. That way its structure isn’t lost and you still receive the nutrients and flavor.

There is another measure of the health benefits of oils, and that is the smoke point of each.

First, a point about smoke points: The temperature at which an oil begins to smoke is relevant to its health benefits since when an oil releases smoke it means that it starts to lose its nutritional benefits and can release free radicals that may become carcinogenic, according to scientific studies.

Both canola and vegetable oil share a similar smoke point of about 400° Fahrenheit, with canola slightly higher at 428°, so in that sense, they are equally healthy. As a point of comparison, extra virgin olive oil has a low smoke point of 374 – 405°, while avocado oil has the highest smoke point of 520° and safflower oil smokes at 510° these two would be the best choices for searing or the hottest cooking methods.

Bottom Line: Canola oil and vegetable oil are both healthy oils to cook with

Both canola oil and vegetable oil made from soybeans have pros and cons. Choosing an oil that is higher in healthier monounsaturated and polyunsaturated fatty acids is ideal over those higher in saturated fatty acids. When cooking, check the smoke point of your oil to make sure you are getting all the benefits and none of the carcinogenic effects of overheated oils.