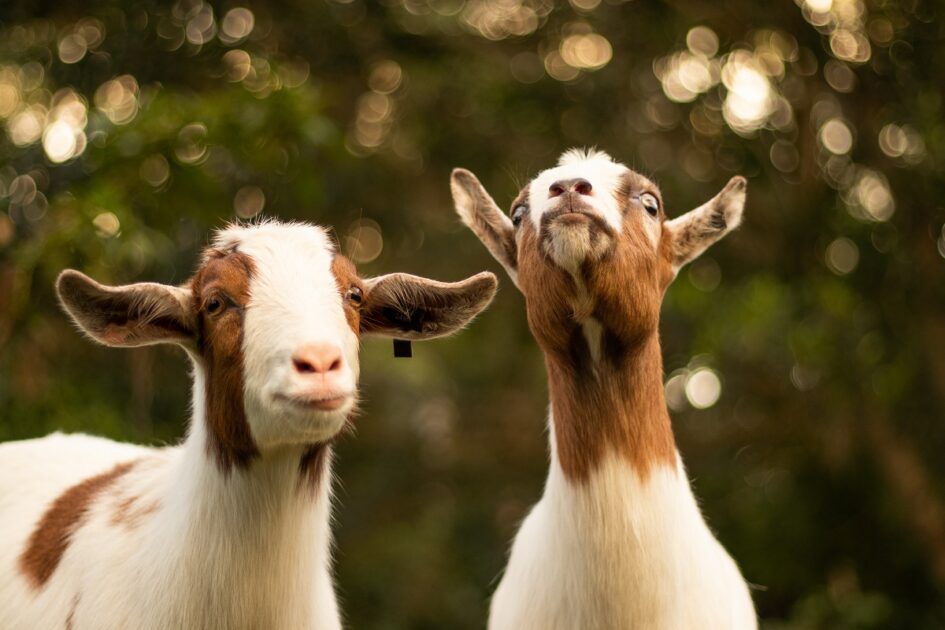 Is goat milk better than cow milk? The two industries are more similar than you think

It’s surprisingly common for people who learn about the darker side of dairy to consider a switch to goats’ milk in the belief that the trade is kinder to goats than it is to cows. But the two industries work in the exact same way, and the same horrors are evident in both. This is the lowdown on why choosing plant milk over goats’ milk is always the kindest option.

Milk is Made for Babies

Whether we choose cows’, goats’ or sheep’s milk, we are drinking the breast milk made by a mum for her young. To stop the newborn kids drinking their mothers’ valuable milk, they are taken away soon after birth. Some may be reared for their meat, others, if they are female, may join the dairy herd, but if no profit can be made from them, they are simply shot in the head. Some farms have even disposed of the babies’ bodies at hunt kennels where they are fed to the hounds.

There are several mutilations conducted on animals to make life easier for farmers, and this includes the disbudding of goats – the removal of their horns before they are fully grown. The British Veterinary Association warns that the process is not only stressful, but it can also cause acute pain from tissue damage, as well as long-term pain arising from nerve damage. The BVA says: “There is extensive evidence that disbudding is associated with pain and distress.”

As for giving pain relief that is not a simple matter in goats. It needs to effectively block four different nerves, compared to only two in calves, and this means there is a real risk of a “toxic local anaesthetic overdose” to young kids.

Most goat milk farms in the UK are zero grazing, which means the animals are kept inside all year round, and never let outside to roam, browse, climb and explore. It is simpler for farmers to keep goats all in one place than to round them up and bring them in each day for milking. Instead, these inquisitive and fun-loving individuals are locked in a shed, and their food is brought to them. It’s a pretty miserable existence for animals who know how to wring every drop of joy out of life, if only they are given the chance.

Check out a typical day at Goats of Anarchy and see how these amazing animals deserve to be treated.

In 2020, campaign group Surge filmed undercover inside a large goat dairy farm in the UK. Their disturbing film showed workers kicking, punching and hitting the animals with a pole in what The Independent called “a string of brutal attacks”.

Such on-farm abuse is sadly not uncommon. Wherever thinking, feeling individuals are treated as commodities, there is the very real possibility of violence. Investigations have uncovered physical attacks happening far too often, including on this UK dairy farm and this US dairy farm.

Being repeatedly impregnated and having their kids taken away from them exacts a toll, and after a while, the amount of milk each goat produces inevitably diminishes. They may otherwise be perfectly healthy, but this is a ruthless industry and there is no room for compassion. And so, the mothers are sent to the slaughterhouse, so that the last bit of profit can be squeezed from their bodies.

No matter the species, the dairy trade is based on exploitation, suffering and slaughter but none of us have to support this. We can simply go dairy-free and choose plant milks instead. They are readily available, very tasty, can be used in cooking and baking, and come in many varieties. Choose from oat, almond, soya, hemp, coconut, cashew and hazelnut, and look out for dairy-free yoghurts, cheeses, creams and ice creams, too.

Need help ditching dairy? Try vegan for 31 days with us and we’ll help you every step of the way.