Where are the meat-eaters at? Come at me! 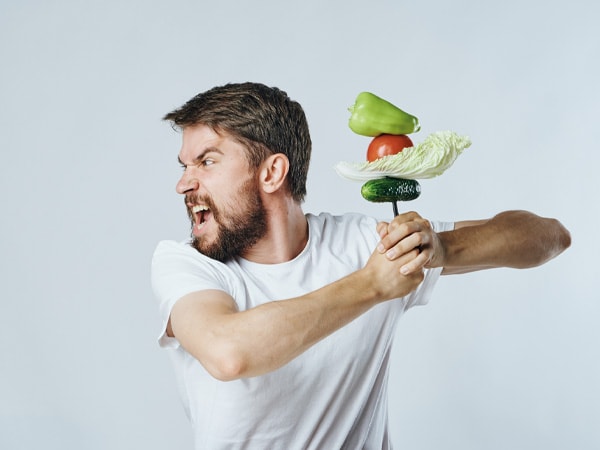 It was a *really* nice box of chocolates. High-end stuff. We’re talking at least fifty quid. Not the kind of thing you’d ever buy for yourself. And there it was. We’d had to drive to a parcel depot to collect it, not knowing what it was. And we sat there in the car park and looked at it.

I weakly suggested we could re-gift it, but we both knew what the other was thinking. We troughed them. In the car park. Like rank little guttersnipes. And, at the time, they tasted glorious. But of course, what I carry with me from that event is not the taste, but the shame of it.

And I can emphatically say that if the same thing happened now, there isn’t a chance in hell that I’d eat them. Even if one were to lay aside the morality of it… I just find the thought of it stomach-turning. I don’t want that in me.

What I am saying is that we do change as vegans, over time. Some vegans, well, some vegans turn away from the cause and go back to eating meat and dairy. Now, those people… I will never understand them.

In Matrix terms, they’ve taken the red pill, seen the world for what it is, and then decided to take the blue pill and plug themselves back into the fantasy.

How and why could you do that? I don’t know what this magazine’s official party line is for the reasons why you go vegan — I suspect it quite rightly takes a broad-church attitude — but I’m going to stick my neck out and say that if you were vegan and then stopped — you were never vegan for the right reasons.

And I have changed in other ways. Just as the meat-eaters have got a little more sheepish over their nasty habit, I think I’ve gained more confidence as a vegan. And as being vegan has got easier and easier, so I have found it harder and harder to accept the people who haven’t done it yet.

Still and all, er, I do hope you have a Merry Christmas! And remember, even a vegan is allowed to bite their own tongue occasionally.