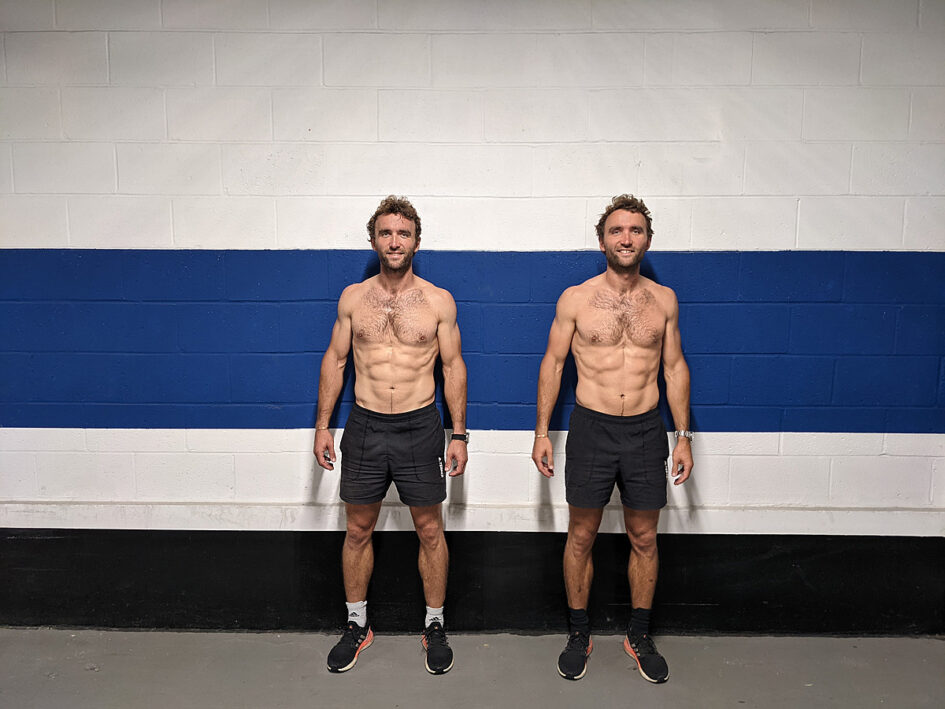 It must be fun to be an identical twin. You can do things like, eat a diet of animal protein for 12 weeks while your sib only eats plant protein for the same period, and compare who got fatter, who got stronger, and who felt like crap. Turns out that this is exactly what Ross and Hugo Turner did, and you won’t believe which twin won or which protein source was the best for building muscle, increasing endurance, and melting fat.

In a new fitness study with a cohort of two – albeit who share the same DNA, making it a more relevant body of work than if it has just been two strangers on the bus – identical twins pitted plant protein vs animal protein. To be fair they have done this before and in the prior study, plant-protein kicked animal’s ass, but in this study here’s what they discovered:

The two adventurers, who go by the handle @TheTurnerTwiins on social, put themselves through a 12-week endurance fitness program to find out the differences between plant and animal protein.

“We did a full study last year comparing a three-month vegan diet against a meat diet and the resulting article went viral. People from all over the world reached out with very passionate opinions and views which created a huge debate. We are not trying to say one product is better than the other, but rather, we’re trying to highlight any differences when comparing the two protein products. It is up to you what you do with our latest findings.”

Before the study began, the twins took scans of their bodies to get a baseline of stats such as fat percentage, muscle mass, and weight, so they could track changes throughout the experiment. They also took starting measurements of how much they could bench press, and their ability to rapidly churn out press-ups, pull-ups, deadlifts, and they measured their VO2 max, or amount of oxygen their blood could deliver while working out. “The important thing with all these tests,” Ross explains, “is that we did them together throughout the 12-weeks so we could directly compare our results.”

“Because the two protein shakes had the same basic macros, we weren’t expecting to see a vast change or difference in performance or body shape,” according to Ross. “Our goal with this endurance training was to drop a little weight but increase our overall strength, meaning our efficiency increased and the chance of success on a long expedition improved.”

As the study progressed, the twins noticed that their strength and body composition profiles began changing as their bodies adapted to the training and weight load. “It was interesting to see how our profiles changed at similar rates and generally followed each other. This was something we expected to happen but seeing it after weeks of training was very rewarding.”

As outdoor expedition athletes, known for summits and other adventures, their endurance training consists of either low-weight, high-rep sets, or high-weight, low-rep sets. “We like to stay in the high rep ranges,” Ross explains. The goal is to prioritize movements that are functional since that is what they need for their adventures. “Compound or complex movements make time in the gym far more efficient. As they were not training for an upcoming expedition, but rather for general health, endurance and fitness, the workouts were something that anyone can do and benefit from.

The results: which type of protein is best, animal or plant-based?

At the end of the 12-week study, it was a draw. “There were no real extra benefits or drawbacks to using either product,” Ross says. “Plant-based protein has the same impact on your training as animal protein for the 9-to-5 gym-goer.

Elite athletes have been using plant-based protein products with success because plant protein works and gets similar results as animal protein, but has also been shown to lower inflammation and allow for faster recovery times for athletes who also give up meat and dairy, which have been shown to increase inflammation.

“We’re not saying this study is absolute,” Ross adds. “There’s a huge amount more testing we could do to uncover more data and results. It’s only a little look into the top-line results of this particular study, which from our numerous 12-weeks studies we’ve already done, we’d conclude there’s little difference in results and performance when drinking either plant or animal protein.”