Which is Healthier: Beer or Wine? The Answer May Surprise You 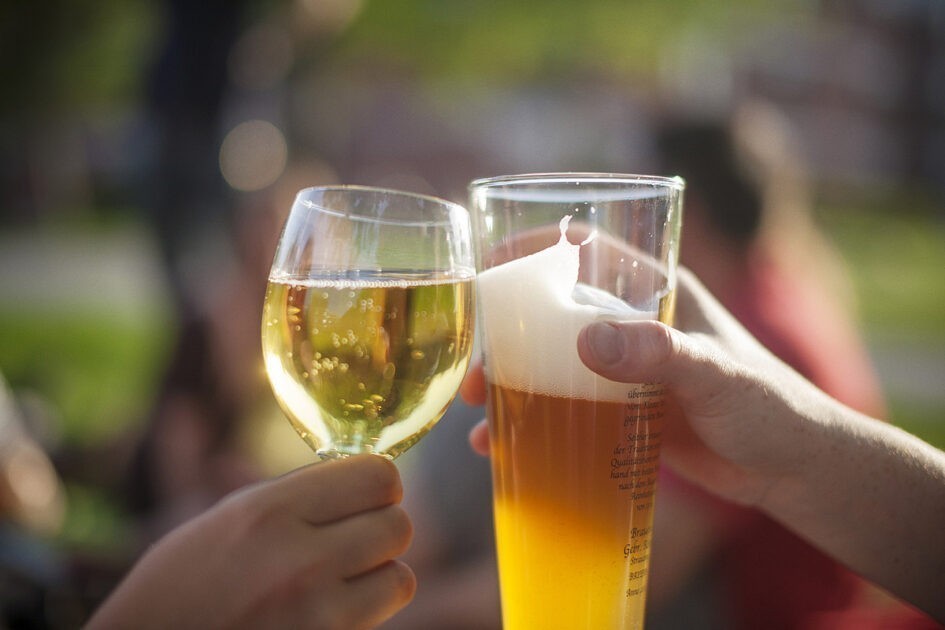 Beer has never had a reputation for being a healthy drink, and the joke goes that a six-pack is part of the dad bod starter pack. Contrary to popular belief, there are major health benefits of beer – so move over, wine.

Two facts that could start an argument at your holiday party: 1. Beer has more nutrients than wine, because of the amazing vitamins found in the hops and the malt. More on that below.  2. Beer may actually help you burn fat because hops have been linked to a reduced risk of metabolic syndrome.

The 5 Health Benefits of Beer

You may not believe this but there are actually legitimate health benefits of beer that make it worth drinking on a regular basis, so long as you sip responsibly. For your next family or holiday party, grab a cold one and know you’re making a healthy choice. Share this with your wine-loving friends and watch their heads spin.

1. Beer is packed with nutrients

Most alcoholic beverages are considered empty calories, but beer is actually nutrient-dense, with vitamin B12 –important for immunity– from the yeast and anti-oxidants from the malt and hops. If you’re watching your macros, the carb content of beer varies based on whether it is light versus standard or dark brew. The mineral and vitamin content of beer will make you want to drink it as a health elixir daily.

The macronutrients in a standard 12-ounce beer

The vitamins and minerals in beer:

Believe it or not, moderate consumption of beer has the ability to help your body burn fat. “Beer has hops in it and hops are not only a bittering agent, but they are a bioactive member of the phytochemical families that stimulate insulin sensitivity and cause lipid metabolism,” according to Jeffrey Bland, Ph.D. as reported by Jill Ettinger, in an article for The Beet. Bland suggests we choose an IPA for best health benefits “because you have more of those isoflavones and humulones from the hops.” But don’t overdo it. “Just as with wine or tequila, it has to do with magnitude,” he says.

3. Beer may reduce your risk of heart disease

In a study of 36 obese adults, researchers found that moderate intake of beer – one drink for women, two drinks for men daily – increased their HDL levels (good cholesterol) and improved the body’s natural ability to clear out LDL, the bad cholesterol. “Beer consumption did not induce vascular endothelial dysfunction or stiffness,” the researchers concluded, which means that it doesn’t add to cardiovascular disease, and actually improved the pathways the body uses to clear out cholesterol. The researchers concluded the study by explaining that moderate intake of beer increases the anti-oxidation properties of HDL “good” cholesterol, and helps improve “endothelial function,” which “may prevent lipid deposition in the vessel wall.” Fermentation makes any beverage, including beer, a gut-healthy booster.

More than 100 million Americans are suffering from insulin resistance which can be categorized as prediabetes or diabetes. A study proves that a moderate intake of beer may reduce the risk of insulin resistance in participants with prediabetes. Be mindful that drinking too much beer, or any alcohol for that matter, could increase your risk of diabetes, according to a different study, since alcohol can raise glucose levels in the bloodstream.

Beer contains two main antioxidants: phenolic compounds or polyphenols and melanoidins, according to a study that credits these as delivering major health benefits.

Polyphenols are capable of reducing reactive oxygen species and may play a role “in the prevention of several major chronic diseases associated with oxidative stress, such as cardiovascular diseases, cancers, type II diabetes, neurodegenerative diseases [and] osteoporosis,” according to the study. “Phenols present in beer help lower blood pressure and increase the concentration of nitric oxide in the plasma, reducing the risk of cardiovascular disease,” the authors wrote.

Melanoidins, which affect the color, flavor, and body of beer, “can exert a certain effect on health,” according to the study. “Melanoidins exert antioxidant, antimicrobial, antihypertensive, antiallergenic, and prebiotic properties.”

Short answer: If someone says, Why is beer healthy? Just tell them it contains “antioxidants that work against free radicals in the body, which have been linked to heart disease, certain cancers, and other diseases, according to scientific studies.”

Is wine healthier than beer?

Beer is actually healthier than wine… read that one more time.

Beer exceeds the nutritional value of wine, even though wine has a health halo as “being heart-healthy” which has been called into some question. (More than half a glass and the benefits get outweighed by the risks, especially for women who have had breast cancer.)

Before you crack a cold one, you may also wonder if beer is vegan. In short, beer is mostly vegan in its basic form because it’s made from water, hops, barley, malt, and yeast. However, there’s one step in the process of making beer called casking, that is not suitable for those who follow a strict vegan diet as ingredients are sometimes filtered through animal-derived products such as gelatin or dried fish bladders to achieve clarity.

If you want a vegan beer, check the label and look for any vegan certification, or you can find a list of vegan-approved beers on Barnviore, which reports that the following breweries don’t use any animal products.

There are also gluten-free beers made with alternatives to barley and wheat, like sorghum, rice, or millet. Gluten-removed beers undergo a process that contains an enzyme called Brewers’ Clarex that ensures all gluten is removed from the beer…just in case.

Bottom Line: Beer is full of vitamins and antioxidants that are healthy

No one is telling you to drink to your heart’s content, but if you love beer, or sometimes want a break from your usual pinot, grab a cold brew and know that you’re doing a body good.

Beer Is Healthier Than Milk. No Pus, No Fat, No Cruelty

The Best Wine to Pair with Your Thanksgiving Dinner

A Low-FODMAP Diet Might Be the Answer to Your Bloated, Cramped, Intestinal Woes

To Be Healthier and Happier Do This Simple Thing Every Morning