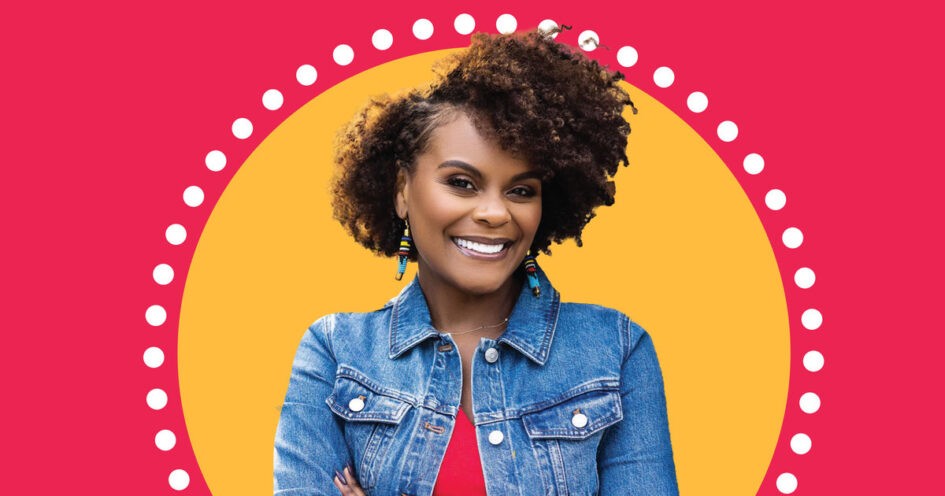 Tabitha Brown wants you to have a good day, but if you don’t, she wants to make sure you don’t go messing up anyone else’s. This is just one of the many gone-viral catchphrases the influencer, actor, and new author has popularized on her lit-up social media channels, where millions of fans tune in each day to see what Brown has to say about avocados (she eats them on most things, either straight-up or sometimes stuffed), her family (she recently surprised her father with a new car), and exercise (she’s been doing her crunches and joked she’ll soon be called “Abitha”).

When Brown—dubbed “America’s Mom”—isn’t posting adorable videos that show her dancing with excitement over vegan garlic-parm croutons, she’s being cast in some of Hollywood’s biggest series (such as Showtime’s The Chi) and being invited onto top talk shows (from Ellen to The Drew Barrymore Show). And though Tinseltown can’t seem to get enough of this Southern belle, it’s Brown’s groundedness and unrelenting commitment to being her authentic self that points to why she is so damn beloved.

But it wasn’t always easy for Brown. She started her career pounding the pavement for acting gigs and making ends meet by driving for Uber around gridlocked Los Angeles. It was during a fateful lunch break from her driving shift when Brown decided to film a reaction video of herself in her car in the parking lot of Whole Foods trying a sandwich she special-ordered at the deli counter. It was that video of Brown devouring her “TTLA”—which stands for tempeh bacon, tomato, lettuce, and avocado, a name that would go on to be officially adopted by Whole Foods—that quickly propelled her to internet stardom, eventually garnering more than 4 million views.

Without question, something about Brown’s calming-yet-joyous approach to sharing vegan food, combined with her perfect comedic timing and over-the-top enthusiasm, struck a chord with her virtual audience—and they couldn’t get enough. And though she’d been at it for years already, from that tempeh sandwich, a Tabitha Brown was born, and there was no stopping her. VegNews’ Jasmin Singer caught up with Brown to discuss the superstar’s quick rise to the top, her passion for vegan food, and what, exactly, feeds her soul. 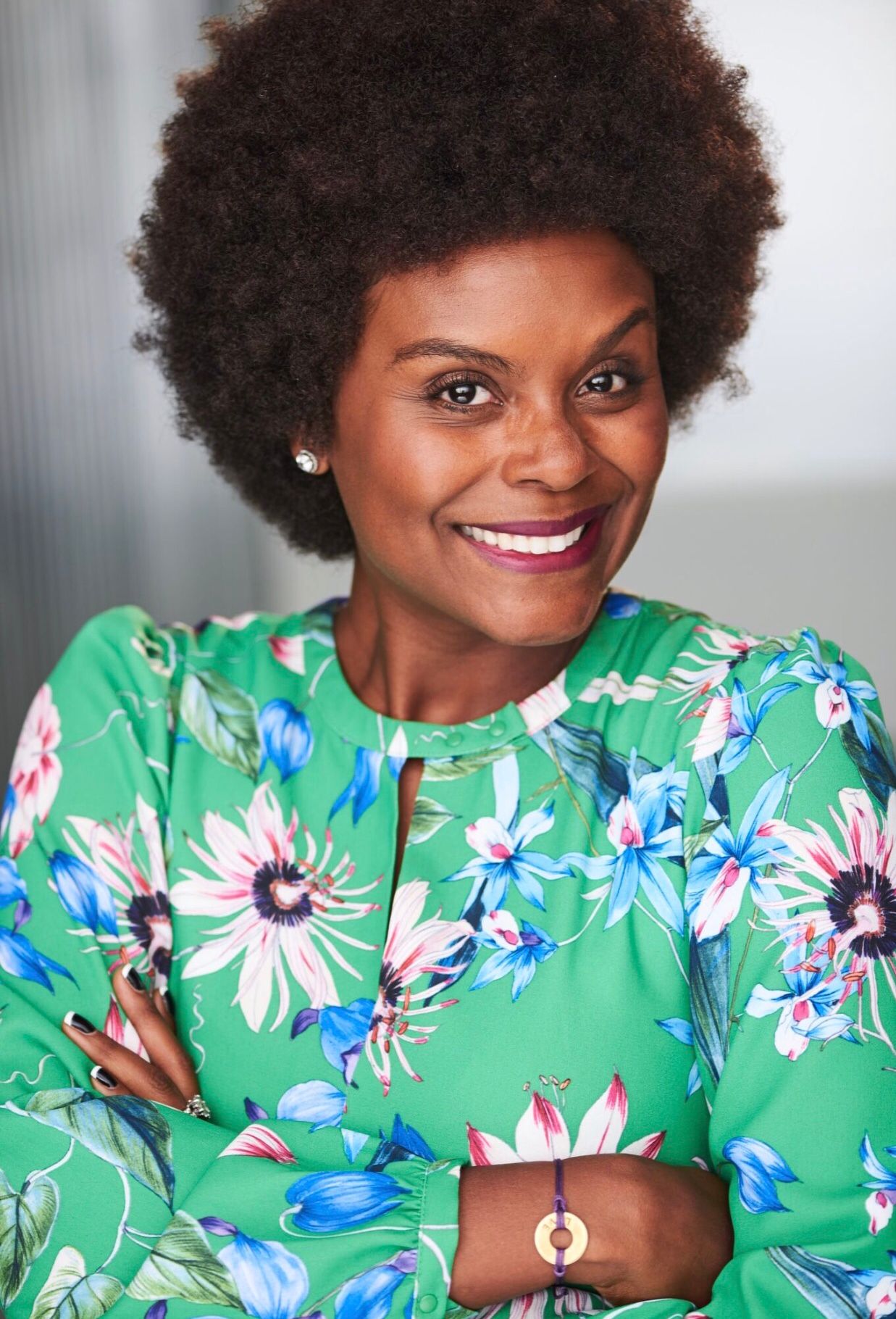 VegNews: You’ve become quite a phenomenon—starting with a sandwich and leading up to running a digital empire. What would you say to someone reading this who has giant dreams but no idea how to go from here to there?

Tabitha Brown: Don’t try to be anybody but yourself—you are enough just as you are. Bring yourself to the camera, bring yourself to your phone, bring yourself to the world, they will listen. And work hard and be consistent. Every day for the last four years, I made videos, and I still do. I’m not saying don’t take a break—take your breaks! But if you have a goal, you have to pursue it consistently. Staying true to yourself is the best advice I can give anybody.

VN: Yet that hasn’t always been easy for you. There have been people along the way who’ve tried to change you, but nowadays, nobody does authenticity better than you.

TB: This is why I can tell someone to stay true to themselves, because I did all of that for 20 years. Whether I was working in corporate America or in Hollywood or whether my agents would tell me to hide my accent or stay a certain size, I would do all of these things trying to fit into what Hollywood wanted to see. That’s not freedom. We should be able to show up as ourselves. I had a lot of small victories along my journey of over 20 years of pursuing entertainment, but it wasn’t until I showed up as me, completely Tab, that my world began to change.

VN: Speaking of which, how did it feel to have a billboard of yourself in Times Square?

TB: Oh my God, that was a lifelong dream. I haven’t been able to go in person to see it, but my daughter got to see it. It’s mind-blowing, and I’m so thankful. It’s a beautiful thing. It makes me full of joy. I’m grateful. I look at it and think I’m doing something right and I’m on the right path. 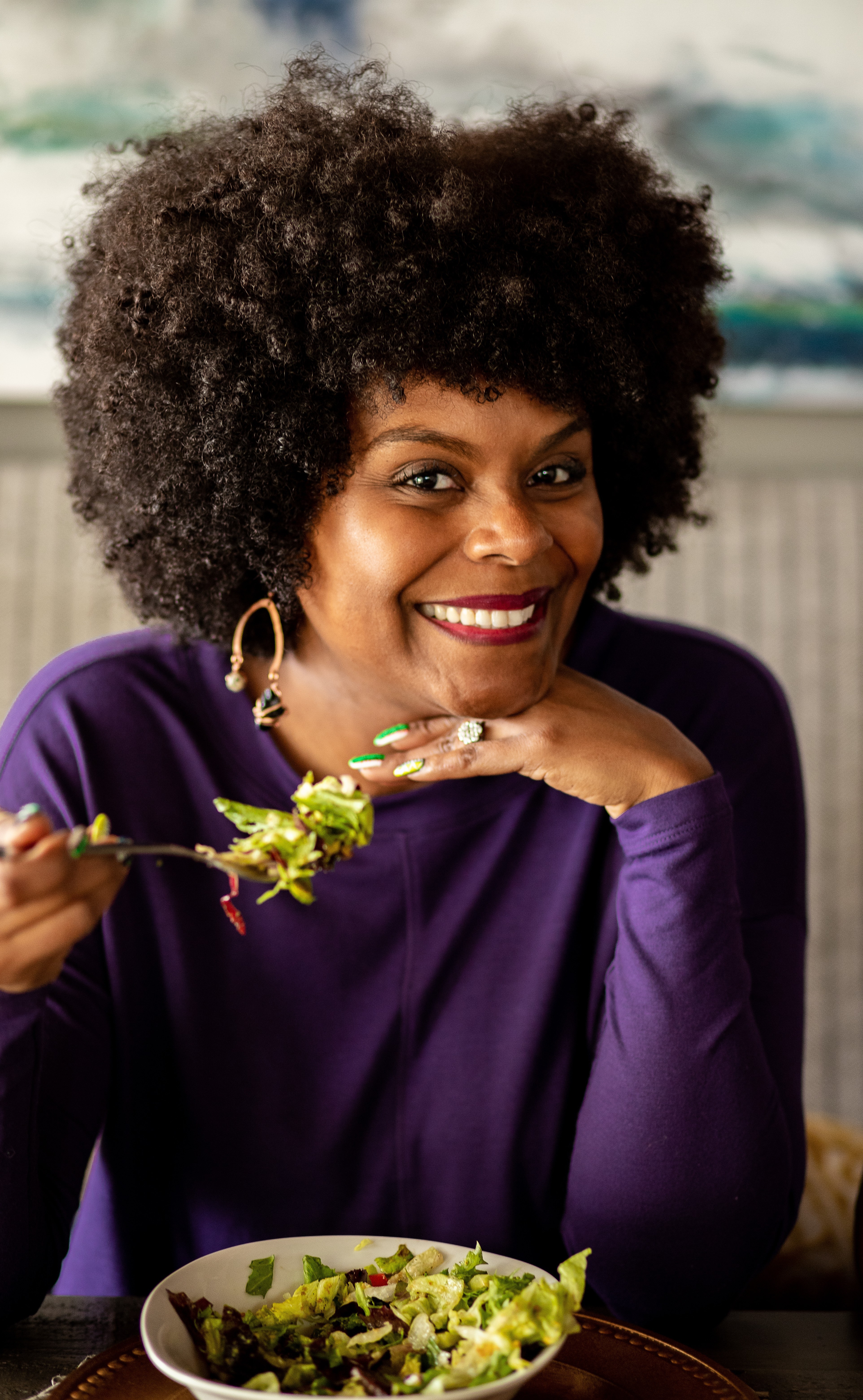 VN: Plus, you have a book that just came out: Feeding the Soul. What does it mean for you to feed your soul?

TB: Oh, honey, for me to feed my soul means I must put myself first. I must put me first so that I am full, and then I can pour out for others.

VN: And we see that pouring out for others in the incredible ways you’ve mainstreamed plant-based living. What was your impression of veganism before you went vegan?

TB: Before I went vegan, I thought it was mostly white people, because that was all I saw. I also thought veganism was like a cult. It just didn’t seem like it was something for everybody, and I didn’t necessarily understand it. I just thought, “Oh, they don’t eat meat,” and that was it. When I started the journey, I started for my health. But as I started studying, learning, and meeting people, my eyes were opened to so much that it blew my mind. It softened my heart even more. I’m not doing something just for me—I’m doing something that is saving animals, the planet, the environment, and other people.

It’s such a huge movement that needs to be understood. This is why I take spreading information with love so seriously. A lot of times, people can be judgmental—I want to be anything but that. I want people to be able to learn without feeling attacked. I want them to be open to veganism. If you give them a little laughter and a little love, but a lot of knowledge at the same time, people are like, “Oh, wait a minute. What you talking about?”

VN: Given your perception that veganism was a white thing, why would you say Black veganism—one of the fastest-growing sectors of veganism—is important?

TB: Black veganism is important because of the diseases that strike our community more than any others—whether it’s heart disease, diabetes, high blood pressure, or high cholesterol—and so many are related to our eating habits. It is devastating. It’s important for us to be included and understand that we have another option. I like to think that I play a huge role in showcasing inclusivity, and Black people realize veganism is for us, too. We’re creatures of habit, and I believe this is part of the barrier. A lot of times, we are afraid of change. When we hear the word “vegan,” we think you’re going to take away our holidays and traditions. All you have to do is rethink that. Hopefully, we’ll add to our traditions, make them a little bit healthier, give us some other options, and maybe we’ll be around a lot longer. 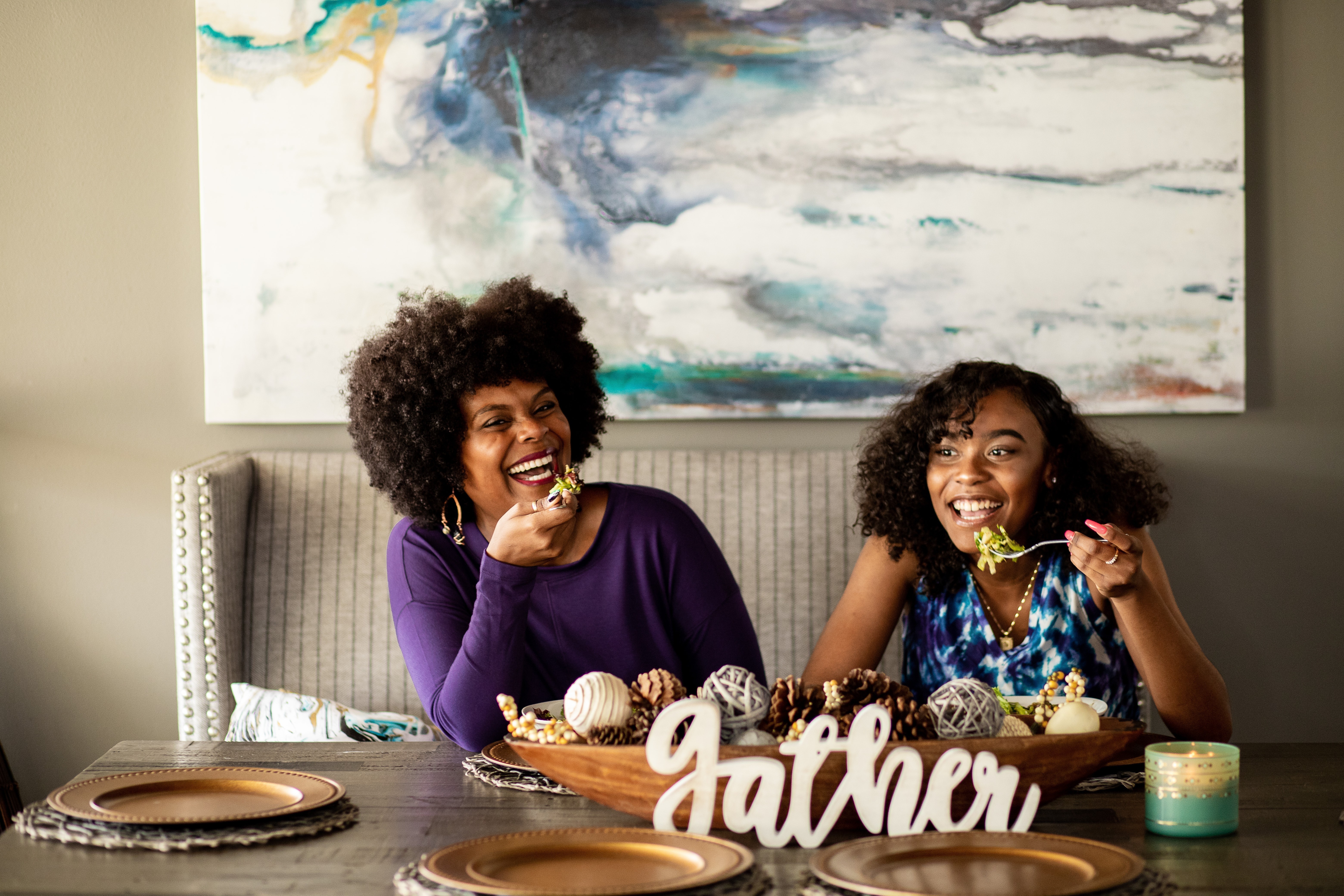 VN: Do you have any tips for how someone might navigate through a situation where some of the family is vegan and some aren’t?

TB: When I first went vegan, I was the only one eating plant-based in my house. We did a 30-day vegan challenge together as a family, but afterwards, my husband and my kids were going back to fish and chicken. I figured, in order for us to eat together, they can have their protein of choice, but I made every side dish vegan. My mac and cheese, greens, beans, and sides were all vegan, so I could enjoy them with my family. I just didn’t have their animal protein; I had everything else. Now, what I figured out how to do is cook real good. I would make faux burgers and faux chicken, trying to recreate and veganize the foods that they’re used to. They enjoyed it and were then eating vegan food without thinking about it. It’s not like, “Oh, this is vegan.” It’s like, “Oh, no, this is dinner,” period. It’s a mind thing. Don’t mention it, just cook it.

VN: Where do you see veganism in five years?

TB: In five years, I would love normalcy, and I’ve already begun to see it. When you look at a vegan menu at a restaurant, it won’t even have to be separated. It will be just like anything else. You won’t have to say “Oh, I’m vegan,” or have to ask for a breakdown of every dish. It’ll be a normal way of life. I think that so many more options will be available, not just in major cities, but all over the world. I’m from a small town in North Carolina where Walmart is our grocery store, but I believe that in five years, honey, you’ll be able to go in there and get anything I can get in Los Angeles. It will always be available to everyone, and the world will be a better place because of it.