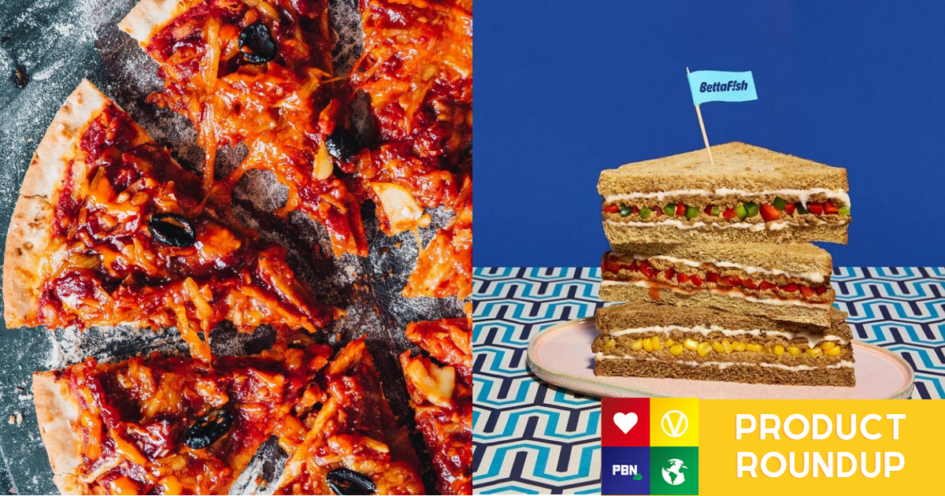 With Halloween on the horizon, the plant-based world has, as ever, got us all covered with ethical indulgence. This year is no different, with vegan marshmallows arriving in Sainsbury’s and a drop-dead pizza launch featuring Wicked Foods and One Planet Pizza.

For Halloween this year, Wicked Kitchen and One Planet Pizza have teamed up to launch a ‘spooktacular’ vegan pizza. Derek Sarno’s vegan brand, which recently launched in the US, partnered with the pizza company to debut the Pulled Mushroom offering.

One Planet Pizza founder Joe Hill said in a statement: “It’s been a plant-based dream come true to collaborate with Derek Sarno, whose innovative creations have proved that eating plants can be even more exciting and tasty than meat and dairy products.

“Our Wicked-Planet Pizza is the first pizza in retail to feature a cheeze shaped ghost. And, we know vegans, vegetarians and meat-eaters alike will be delighted with the epic flavors in every slice.”

Aldi customers in Germany are set to taste some top vegan seafood alternatives. This month, over 4,000 outlets are offering the fishless sandwiches made with start-up BettaF!sh’s tuna analogs, TU-NAH.

The product was made to help provide a solution to the environmental impact of industrial fishing, as well as providing a healthier option to fish.

JUST Egg, a renowned vegan egg brand, is taking its JUST Egg Folded to all 57 Costco locations in California, US.

A club pack, complete with 18 Folded plant eggs is available for $14.99. And the company describes it as a ‘fluffy folded egg, perfect on top of toast’. Its main ingredient is mung beans, meaning the product is packed with protein.

And, it’s easier to prepare than eggs because they can be cooked straight in the toaster.

Award-winning vegan confectionery brand, Free From Fellows, is launching three flavors of Vegan Mallows at Sainsbury’s stores across the UK.

Additionally, they are free from the top 14 allergens. Each 105g bag, whether it’s Strawberry, Vanilla, or Mini Pink & White Vanilla, is on sale for £1.50.

Bravura Foods, the owner of Free From Fellows, sent a statement to PBN. Co-founder Karl Morris said the launch marks a ‘natural progression’ for the brand and ‘timed perfectly for Halloween…to make sure nobody is left out at those key occasions’.

The award-winning brand’s range is available in over 600 stores from next month, with Ginger Shots arriving in both Asda and Co-Op, and the Turmeric Shot and Prebiotic Shots coming to over 170 Asda stores.

It follows the company’s announcement that it raised over £2.5 million, with plans to further expand over 2022.

Stores nationwide are offering the Plant-Based Burgers, Breakfast Links, and Breakfast Patties. What’s more, the company claims the launch is a first for Walmart in adorning meatless meat in its breakfast section.

unMEAT drops in US, with plans to reach UK next year

Century Pacific Food INC, a fish and dairy producer based in Asia, has debuted a plant-based range of meat alternatives in the US this week.

Senior executive Nikki Dizon told PBN: “One of the biggest concerns about plant-based foods is that they are not delicious or as pleasing to the palate as real meat.

“But our Nutrition Science team took that as a challenge, and completely delivered by coming up with a meat alternative that unbelievably and undeniably looks, feels, and tastes like meat.”

Moreover, the brand has plans to come across the pond by 2022.

It’s said to provide the magical taste of our favorite caffeine but in smoothie form: and bursting with vitamins. ‘Profee’ is from a TikTok trend, where users add protein powders to level up their coffee.

The brand has created two new smoothies in Vanilla Protein Cold Brew and Mocha Reishi Cold Brew – and both are sweetened with monk fruit.

They’re available at La Colombe outlets in New York City, US, from October 28. And, from November 2, they’ll arrive in further outlets across the country.

Treat yourself with these vegan products for a cosy Halloween season