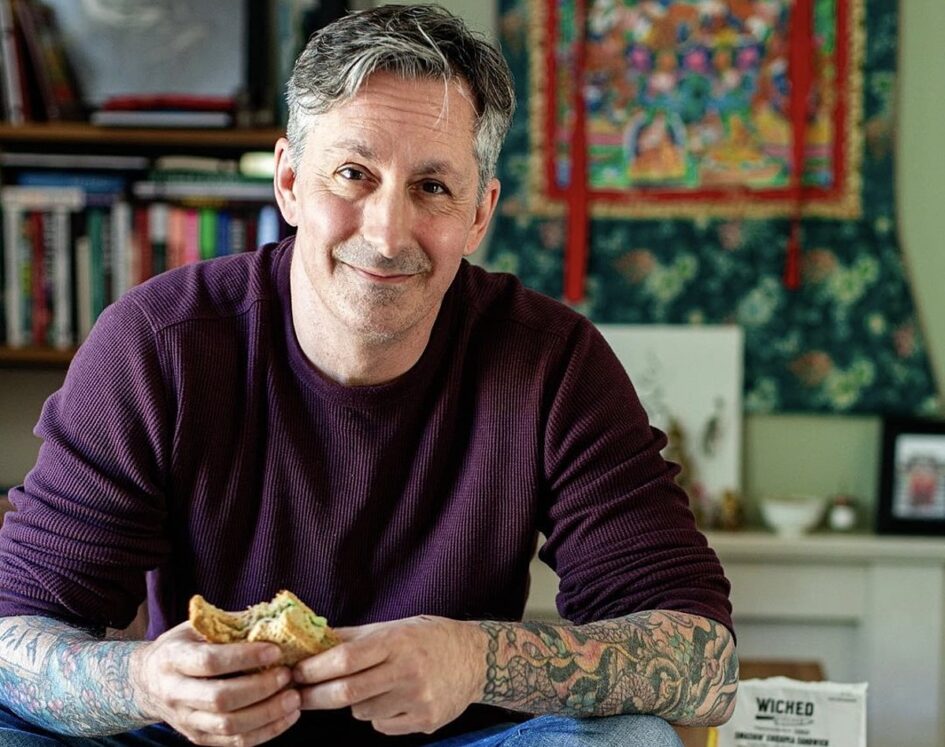 Derek Sarno is on a mission to make food that everyone wants to eat. And one detail about that food is that it happens to be vegan. Food should be “80 percent healthy and 20 percent wicked,” he tells people, so along with offering healthy nutrition, your meals should be joyful, delicious, and “sexy.” It’s a word he applies to mushrooms, which he is fairly obsessed with. His mushroom love is the basis of many of his meals, as evidenced by a recent caption on an Instagram post that shows a hand holding up three gorgeous mushrooms that reads: “Gimme mushrooms or gimme death.”

Mostly healthy, partly wicked, and 100 percent plant-based is the ethos of Wicked Healthy, the blog Sarno started with his brother Chad, that gave rise to their vegan food line, Wicked Kitchen, which they introduced in 2018 and it took the UK by storm. Wicked Kitchen is now available in the US. Together and separately they have worked to make eating plant-based more accessible, an everyday option for mainstream America (as opposed to only those who are plant-based), and completely satisfying and delicious.

The Wicked Kitchen brand of ready-to-eat meals first launched at Tesco, the giant retailer where Sarno is Executive Chef and Director of Plant-Based Innovation, and now Americans can rely on these vegan options, since as of last month, they have landed on a store shelf near you, at more than 2,500 supermarkets nationwide, 2,200 Krogers and 350 or more Sprouts.

Sarno, who has been busy in the kitchen with his camera crew and dog, Frankie, finds time to do more than most humans in the course of a day, a week, or a lifetime, including having spent months at a Buddhist monastery, and now he is starting a regular column for The Beet. He will share his recipes, his appreciation and love of mushrooms as a meat substitute, and show average chefs (who enjoy pretending to be above average when we yield a knife, a pan, and a stirring spoon) how to concoct delicious and “sexy” meals that leave meat off the menu and keep all the taste, scrumptiousness, and texture that we crave and that a good dinner should deliver.

He has just written, with Chad, the Mushroom Manifesto, a digital book that shares their full breadth and depth of knowledge about the magical fungi, including recipes and relatable stories, as an ode to this near-mythical natural wonder. Why people don’t love mushrooms (and there are stats to say they don’t) is lost on Sarno. He is on a mission to change that.

On a call to discuss his new column, which he and Chad and Dave Joachim, their co-author, and regular collaborator, have cleverly named “In the Wicked Kitchen On The Beet,” Sarno is calm, his voice unwavering and his gaze undistracted. His passion for vegan or plant-based cooking comes through, along with a grounded intelligence about what it’s going to take to make the world believe that eating this way – sans animal products – is not only the mandate for a future healthy planet but also preferable, for taste and satisfaction and sheer enjoyment.

Sarno’s savory voice only gets excited when he starts talking about mushrooms, and then, in a fairly measured tone, sitting in his London house where he does all his video production and food experimentation, he admits to being “super fired up” about mushrooms. Sarno talks about mushrooms the way other people talk about space travel. It’s the future, and we are all going there, eventually.

“I’m super fired up about [mushrooms] because there are so many things you can make out of them. For the past decade, all I’ve been doing is testing and working with mushrooms. You have fake meats and I fully support them, then you have the cellular agriculture, but the gap in the marketplace is the whole food market. Mushrooms are the star of the show.

The Beet, Editorial Director, Lucy Danziger caught up with the mild-mannered chef, who one suspects is a superhero when he puts on his chef’s apron. He tells us his story, and inspires us to want to make food that “is good for everyone” but happens to be plant-based:

Derek Sarno Explains How to Make Food for Everyone, that Happens to Be Vegan

Lucy Danziger: Tell me your story. Why did you start Wicked Kitchen?

Derek Sarno: It started with me and my brother, Chad, when we came up with the idea a few years ago. It started as just a blog to share recipes because I wanted to show people who were eating animal products that it’s very easy to make vegan food super satiating, satisfying, delicious, sexy, and just cool. The whole cooking experience – and the taste experience – are amazing. When I first went vegan, it opened up a whole world of creativity for me.

LD: How long have you been vegan?

DS: I’m going on six years in January. Chad went vegan first, he’s been vegan as long as I know. I was actually the one who made fun of him. I was always that chef and I used to cook animal products, it’s not something I’m proud of but it shaped who I am today.

LD: Identity is tied to food. How do you get people to change how they approach it?

DS: Yeah, I agree! Food is also traditions and habits. Food is about culture and background. To me it’s habits. I used to live in a Buddhist monastery for years and I was able to practice, study my mind, and sit and meditate a lot, so I understand how it’s worked, at least for me. I learned that we become attached to certain things and cling to certain perceptions of ourselves, including habits. Food is a habit. It’s like smoking. We either have to wean off it or know how to replace it with something else. If you’re an alcoholic, you don’t allow yourself to have a drink once in a while. You work with what you have, and there are so many vegetables out there that really replace the flavor of meat, like mushrooms.

LD: The human condition is both where do we come from and where are we going.

LD: Why are you excited about mushrooms?

DS: Mushrooms give off a meaty texture, more nutrients, and protein. I’m super fired up about them because there are so many things you can make out of them. For the past decade, all I’ve been doing is testing and working with mushrooms. You have fake meats and I fully support them, then you have the cellular agriculture, but the gap in the marketplace is the whole food market. Mushrooms are the star of the show.

DS: There’s a lot of reasons to love mushrooms, whether their nutritional benefits or texture. Mushrooms in the retail stores are likely grown in greenhouses but if you forge for mushrooms you get different kinds of benefits like the nutrient-rich minerals from the soil. If you can forage for mushrooms, that’s amazing.

LD: What mushroom recipe should we be making?

DS: It’s not so much a recipe, it’s a technique and we’ll share that technique in our upcoming column with The Beet. It’s pressing a cluster mushroom between two cast iron pans and making them into a steak. We have tons of content on this in our cookbook YouTube and website.

LD: I don’t think anyone thinks of mushrooms when they think of steak.

DS: Or, most people think of portobello mushrooms as the steak, and that’s not what we do here. The right amount of heat and a little bit of oil gets you that crisp, chard skin on the outside. I use cast iron pans when cooking a certain way. I don’t use any other thing, I use what works.

LD: Tell me about Wicked Healthy. I love your cookbook! And recipes.

DS: Well we have tons of recipes on the Wicked Healthy website if you want to cook at home. Not everyone has time to cook, so we made Wicked Kitchen in 2018 in the UK.   We launched with 20 vegan meals – Pizza, salads, sandwiches – all ready meals. It was awesome and really took the country by storm. It was the largest vegan branded launch that I know of. Now we’ve grown to 140+ products within Tesco in the UK. We recently launched more than 20 products in 2,200 Krogers and 350 to 400 Sprouts in America, so that ranges from frozen ready meals to shelf-stable products like shredded mushroom kits and mayonnaise. We did a collaboration with Beyond Meat. These meal kits make it easy for you to cook and provide easy, convenient solutions that are super delicious and tasty.

LD: What’s the goal of your products? Are we saving animals, the planet, or our health?

DS: My personal goal is the animals. But it’s for whatever reason you want. You want to eat whole food, all-natural ingredients, but it’s just – good luck finding it in a ready meal! So you’ll have to cook it at home. And we’re here to help you.

Our whole ethos at Wicked Healthy is, eat 80 percent healthy and 20 percent wicked. That’s the balance, to be 100 percent plant-based. If you don’t allow yourself a little indulgence, then it’s easy to fall back into your old habits.

DS: Well, I’m a food developer so I’m constantly eating food. This morning I had one of our porridge pots, it’s just a little oatmeal. For lunch, I made myself a tofu bacon club sandwich. Back in the ’80s, I used to make club sandwiches with animal products and I was craving one, but with tofu bacon with spices. I’ll post a picture of it on my Instagram. For dinner, I’ve been going through all these frozen ready meals to make sure I’m confident. I like green beans, baby corn, broccoli, Beyond burger, I eat mushrooms, it depends on the day.

LD: Do you have a mantra?

DS: I’m Buddhist so I have tons of mantras. As far as what people would understand: Make a choice, stick to it, and get it done.

LD I love that. And check back into The Beet for your new column: In the Wicked Kitch, On The Beet launching September 27th.

Look And Feel Healthy Inside And Out