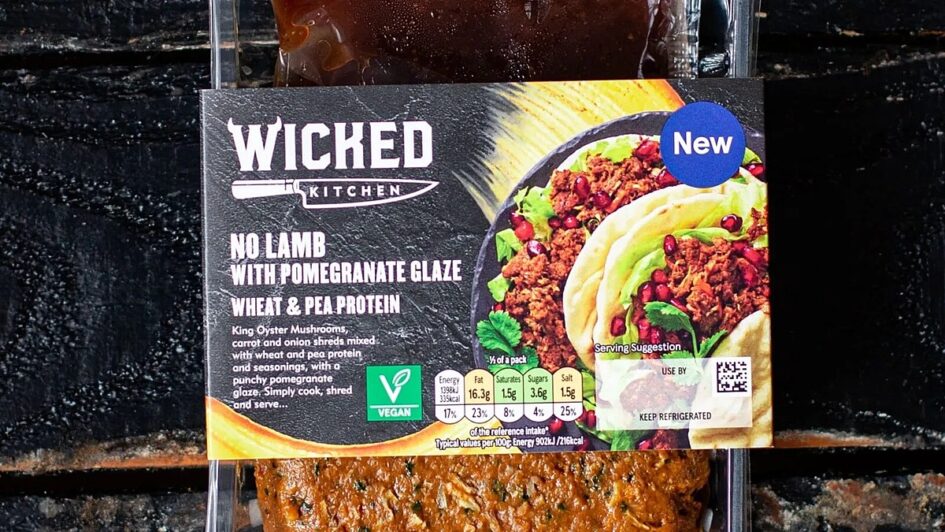 The lamb is “Chef-crafted with king oyster mushrooms, and a pea and wheat protein blend,” Sarno says. He calls it: “Shredding ready and perfect for mid-week or Sunday Roasts, Middle Eastern-inspired wraps or some fancy pants taco.”

Wicked Kitchen will initially launch the plant-based lamb at all Tesco locations across the UK but so far it isn’t available in the US. The plant-based company has recently expanded its line of vegan meals to retailers across America including Kroger and Sprouts and is available in over 2,500 stores.

Sarno and his brother Chad founded the company in 2018 to innovate new healthy and delicious offerings that are differentiated because they are chef-created. They saw gaps in food categories in the growing plant-based market, and are filling them with items such as this lamb alternative. The Sarno team plans to develop its Wicked Kitchen brand in several new directions, eventually expanding globally into more countries.

“It is my personal mission to work with all of our partners and suppliers to set the gold standard in chef-driven plant-based foods for all others to benchmark,” Derek writes on the company’s website. “That is how we’re going to change the world!”

The No-Lamb Roast is the first product to follow the Wicked Kitchen recent Series A funding round that secured a $14 million investment package. The company announced that the investment package would be dedicated to both distribution expansion and product development.

“This funding supports the next giant leap in growth and adoption of the Wicked Kitchen product line – a journey that will span the globe,” Wicked Foods CEO Pete Speranza said. “As was demonstrated by Tesco, the UK’s largest supermarket chain, the breadth of offerings Wicked Kitchen brings to the market allows motivated regional retail partners to commit to multi cross-category adoption. What Wicked brings into the US will be unlike anything else that has come before it in the plant-based space.”

The Sarno brothers consistently remain at the forefront of plant-based protein alternatives. The duo also founded the vegan brand Good Catch in 2019 to provide plant-based consumers with a plant-based seafood product line. The company’s first product was a plant-based tuna and it has since expanded to feature vegan fish cakes and breaded fish filets.