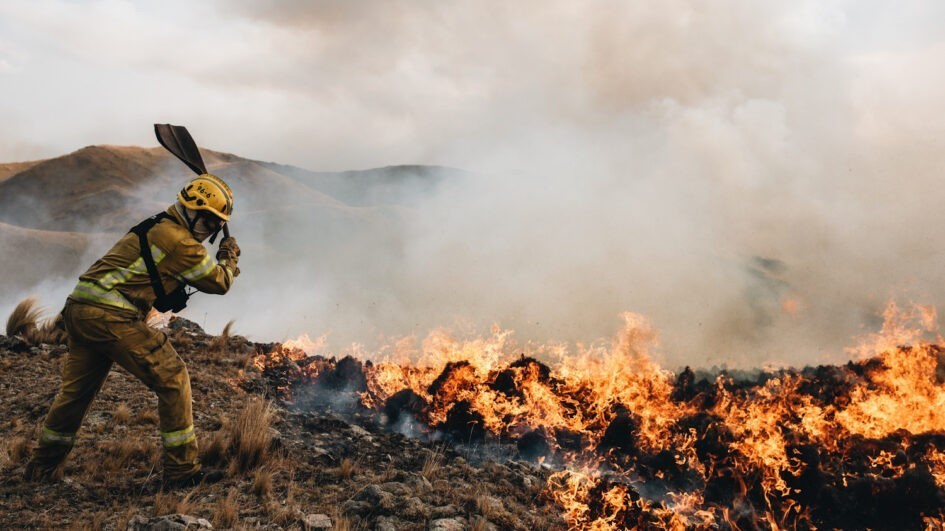 Forest fires are increasing in frequency and severity in the US and around the world. A sudden cold front has brought snow to the typically mild-in-winter areas of California. But even as millions of Americans face freezing temperatures, the nation’s unseasonal winter wildfires are set to continue. Yes, fire risk in winter is real—and it’s getting worse.

Low temperatures can’t prevent wildfires from spreading: The strong winds a polar vortex brings are known to reignite and redirect dwindling blazes. So as fires continue to burn into summer, the “official” fire season may become year-round.

“Californians need to be thinking about and preparing for fires throughout the year,” explains Lenya N. Quinn-Davidson, Area Fire Advisor at the University of California Cooperative Extension and Director of the Northern California Prescribed Fire Council.

A UN Environment Programme report published this week predicts a global increase in extreme fires of 14 percent by 2030, 30 percent by 2050, and 50 percent by 2100. It cites worsening climate change and exploitative land use as the primary culprits.

The scientific community is practically unanimous in linking increased extreme weather events, such as wildfires, with climate change. But the way the US currently manages forests, brush, and plant life is also a key contributing factor in the way fires start and escalate.

Over-managing woodland by fighting even small fires, as the US has now done for decades, builds a surplus of fire-ready kindling and brush to act as tinder, fanning the future flames of what could have been relatively minor incidents otherwise.

By contrast, intentionally starting periodic, manageable fires—a method known as “controlled burning,” long practiced by Indigenous communities around the world—could help prevent large and unwieldy blazes later in the season. Even California’s prolonged drought, a key contributor to out-of-control wildfires, could be used to facilitate winter windows for burns.

“Active management is a key piece of this puzzle,” says Quinn-Davidson. “Activities like thinning, prescribed fire, targeted grazing, and home hardening can help protect our homes and communities from wildfire impacts, and we need to seize every opportunity to employ those tools.”

In short, the single best way to save the land from destructive wildfires is to return it to those who have been caring for it efficiently and sustainably for generations by using holistic, active management techniques such as those described by Quinn-Davidson.

The US Fire Service to incorporate controlled burns

In order to tackle the increasing number of severe, unseasonal wildfires, President Joe Biden’s administration suggested in January that the US Fire Service officially incorporates the practice of controlled burns in order to mitigate future risk.

The so-called Wildfire Crisis Strategy specifically earmarks $50 billion to double the use of controlled burning and tactical logging in order to make 50 million acres of forest healthier and more resilient over the next decade. Secretary of Agriculture Tom Vilsack has referred to the adjustment as a sharp “paradigm shift” for the US Fire Service, in particular.

The agency now needs to transition from its current mode of operations (extinguishing all fires, wherever possible) to incorporating the controlled burns frequently employed by Native American tribes, collectives, and individuals. The end goal is to create fire breaks, which are gaps in vegetation that slow or stop the spread of flames.

Specifically, thinning trees and tidying overabundant vegetation in the most vulnerable parts of western North America, where the woodland meets human homes, could help the US better control the nation’s worsening wildfires.

These hotspots make up just 10 percent of fire-prone areas nationwide, but pose an enormous risk to communities due to their proximity, population density, and location. These factors combine to make those who live there extremely vulnerable to out-of-control wildfires.

The US Fire Service’s current methods are an outdated hangover of early 1900s forest management, and have so far failed to reduce wildfire frequency and severity.

By contrast, controlled burning has been reinforced by scientific studies and countless first-hand accounts as something that can do this. It reduces the build-up of fuel, in the form of unburned brush and branches, and has the potential to make wildfire-fighting far more efficient (and cost-effective) than the way the Fire Service works now.

In addition to reducing the risk from wildfires, prescribed burns also enable the following season’s growth. This benefits the plant and animal life that depend on, and play a role in, a healthy ecosystem. One study even shows that the smoke helps to transport fungal spores, while another reports that prescribed burns produce significantly less carbon than wildfires. (Offering a much-needed way for the US to significantly reduce its overall carbon emissions.)

Indigenous communities have long advocated for prescribed burning, both to supplement existing land management and to preserve traditional practices. Controlled burns are just one component of Traditional Ecological Knowledge (TEK), also known as Native Science, which represents the ongoing accumulation of knowledge acquired by thousands of generations of Indigenous people.

TEK is gained through direct contact with the environment itself, and acknowledges the integral relationships formed between humans and nature. This includes how to sustainably hunt, grow, and fish for food all year round with minimal disruption to the ecosystem.

Native Science has also, historically, been maligned by the federal government, and wildfire management is no exception. For over 13,000 years, California’s Native American tribes have deployed prescribed burns to reduce wildfires, create new wildlife habitats, and remove invasive plants. But, many still face persecution and penalty for their actions.

Intentional wildfires have been outlawed in California since 1850, back before it even became a state. It took over 100 years for the National Park and Forest services to update its colonial policy on woodland management, both in 1968 and 1978, when the organization revised its endorsement of fire suppression to accept a meaningful (but limited) role for controlled burns.

Biden must consult with Indigenous tribes to save the land

While Biden’s acknowledgment of prescribed burning’s worth is welcome and long overdue, it does not address the heart of the problem: who gets to have a say in land management?

Indigenous experts must be directly involved in the process in order to avoid further appropriation, marginalization, and whitewashing of environmental protection. This will arguably be the single best way to ensure an improvement in ecological health nationwide.

Rhiana Jones, the Acting Environmental Program Director at the Washoe Environmental Protection Department, has been utilizing TEK methods such as prescribed burns for years in order to return lands to as close to their pre-colonial condition as possible.

The Washoe people live close to Lake Tahoe and the California-Nevada border, and share similarities with both the Great Basin and the California Cultures. According to Jones, the Washoe’s modern relationship with fire has been minimal due to federal and state restrictions; directly and negatively impacting both their ability to practice their culture and the environment itself.

“Years of fire suppression, in addition to climate change and drought, have created a volatile situation in our area where wildfires are burning so hot and devouring forests that different land management techniques need to be explored,” explains Jones. “Other [federal] policies will need to be changed as well, air quality regulations on burning for instance.”

Speaking to the cultural importance of the practice, she adds that what we now call land management was traditionally the Wahoe Tribe’s way of life.

Wood was collected to keep fires burning, and trees such as Pinyon pines were trimmed and cleaned so they could be an easy source of pine nuts. Overall, environmentally conscious ecosystem maintenance was an inherent and holistic part of existence, rather than something broken down by departmental bureaucracy and colonial values.

“To have Indigenous knowledge accepted into mainstream land management is a big deal,” continues Jones. “Indigenous people have been managing the lands long before colonizers arrived and only now, when the situation with wildfires and climate change is so dire, are people willing to look to the past for alternative land management tools.”

Decriminalizing controlled burns and transferring land stewardship back to Indigenous groups has both cultural and environmental significance, as does the official recognition and use of other TEK into modern firefighting techniques ecosystem management. (Providing Biden’s administration incorporates the former when implementing the latter.)

“The Government needs to increase consultation with Indigenous Tribes and actually listen,” says Jones. “Oftentimes Tribes are included for consultations merely so agencies can check a box saying they consulted with the original inhabitants of the land. […] I think prescribed fire and cultural burn practitioners should have a larger role in policy changes.”

She specifically highlights the work being carried out by the Indigenous Peoples’ Burning Network (IPBN), a support network working to revitalize traditional fire practices within a modern context. The IPBN is led by and serves Native American elders and practitioners.

‘Momentum for cultural burning is gaining’

Meanwhile, the Nature Conservancy (TNC), one of the largest organizations of its kind in the world, explicitly acknowledges the links between post-colonial land justice and ecological health. It’s Indigenous Peoples and Local Communities Program facilitates the transfer of territory back to Native American tribes, for the sake of land and environmental justice.

Notably, all three of these land transfers were facilitated by environmental protection organizations like TNC. Overall, ecosystems successfully returned to the control of tribal nations typically end up with far healthier ecosystems than they had previously.

“To have documentation, examples, experience from many backgrounds and Tribes collectively is key,” continues Jones, again highlighting the urgent need for Indigenous leadership within Biden’s new plan. It’s more important than ever. “I feel like the momentum for cultural burning is gaining because there is real need for it now.”

Is there a link between flooding and climate change?