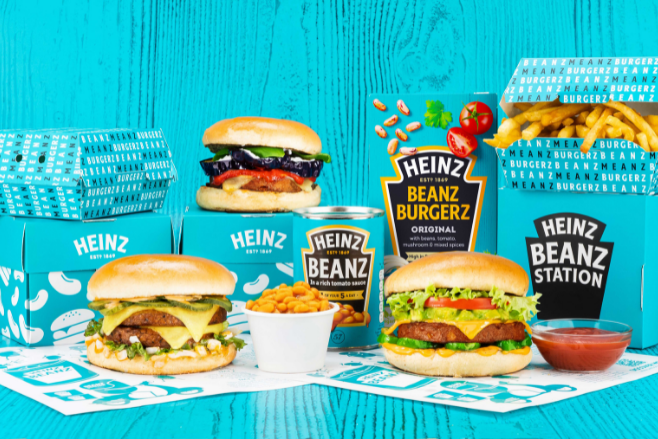 Yes, you read that right – Heinz Beanz is kicking off a ‘Beanz Burgerz deliveriez’ service – the ‘Beanz Station’, in partnership with Deliveroo, and the vegan options look amazing.

From today onwards, Heinz Beanz will be available to order at the tap of a button, not in their usual form, but as BURGERZ. Available until the 31st October, Londoners will be able to order a host of different Beanz Burgerz and delicious sides via Deliveroo from two different locations: Clapham and Kings Cross, with a delivery radius that covers much of South West, Central, North and East London.

The menu features five different beanz-y burgerz to choose from, with all being meat-free and two of the burgerz being vegan:

This one is for spice lovers! The Tex-Mex Beanz Burger is complete with Heinz’s Texan Beanz Burger full of beanz, spicy chilli, chipotle and sweetcorn, an array of green toppings including lettuce and guacamole, all topped with drizzles of Heinz [Seriously] Good Vegan Chilli Mayo.

Whether it’s first thing in the morning or on-the-go, the All-Day Breakfast Burger will deliver that daily protein hit. Complete with the Heinz Original Beanz Burger, melted vegan cheese, sliced tomato, grilled mushrooms, topped with more Heinz Beanz (because what’s an All-Day Breakfast without beans?!), and either Heinz Tomato Ketchup or HP Sauce, this burger will be sure to add to the day’s all-important energy intake. Can be made vegan, by swapping out dairy cheese for vegan cheese:

The Burgerz are the first in a new line of plant-powered meals the ‘Beanz boffinz’ at Heinz have been working on, as the demand for healthy, plant-based alternatives continues to rise.

This ‘Beanz Liberation’ comes as one in three Brits claim to have stopped or reduced their meat consumption2, and as vegetarians are set to make up a quarter of the British population by 2025 (theguardian.com).

Sam Ford, marketing lead for Heinz UK New Ventures said: “We’re proud to be the nation’s favourite when it comes to Beanz, and we’re constantly looking for new ways Brits can enjoy them.” “Our Beanz Burgerz are one of a selection of new Beanz products being released this year and next, and we can’t wait to hear what the public think of them.”

“We’d love to hear from Beanz fans who want to see the ‘Beanz Station’ pop up in their local town or city too, and who knows, perhaps we can do an even bigger rollout in the months to come!”

London-based vegans looking to try the exciting new Heinz Beanz Burgerz can do so by ordering from the Kings Cross or Clapham locations via the Deliveroo app every day from 18th August until the 31st October.

And for those who aren’t London-based? Fear not, as Heinz’s Beanz Burgerz are now available for the public to try at home via Tesco (in-store and online) and Ocado nationwide.