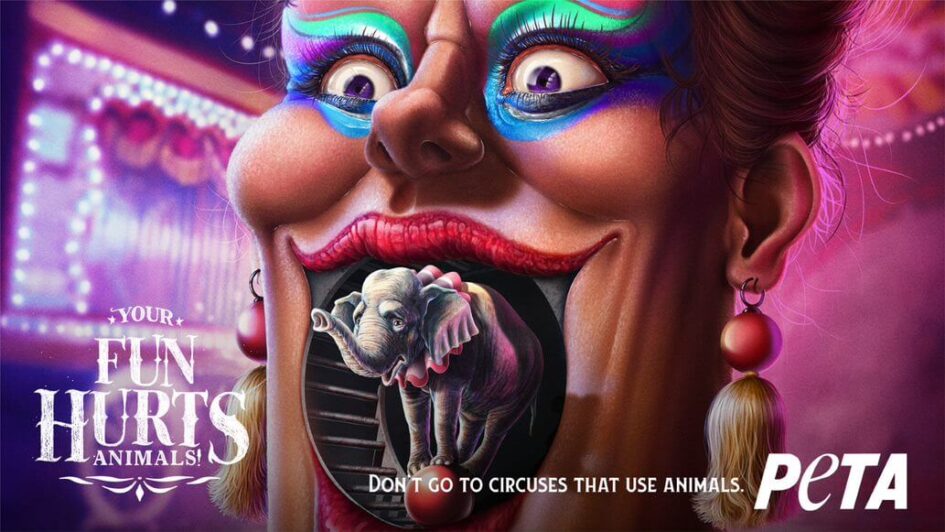 Elephants are highly social animals who live in matriarchal herds, sharing mothering responsibilities for the herds’ babies. In nature, they spend their days socializing, browsing on trees and shrubs, playing in the mud and water, and exploring vast habitats. While touring with circuses, they spend the vast majority of their lives in chains, unable to take more than a step in any direction. Trainers use fear and pain to force them to perform. The exhibitor who supplies elephants to Loomis Bros. has been repeatedly caught striking elephants in the face and jaw with bullhooks. In their natural habitat, tigers are apex predators who control vast territories and raise their young. In circuses like Carden, they’re locked in cages. They’re whipped to force them to perform tricks that they don’t understand. Regardless of how long they’re kept in extreme confinement, tigers never lose their genetic drives. UniverSoul continues to force zebras to perform even though, as a prey species, being in close contact with humans—whom they view as predators—is highly stressful. Circuses put these sensitive animals in danger: Frightened zebras have escaped from UniverSoul and run through city streets on two different occasions. Zebras who have escaped from other circuses have sustained deadly injuries. The crazed look on this scary clown’s face is how zebras must feel in circus arenas.